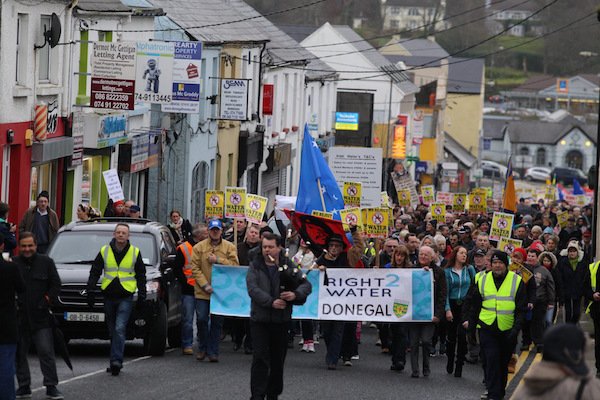 Transport plans in place for Right2Water demonstration in Dublin

Right2Water Donegal are encouraging people to take part in a demonstration to show their rejection of the water charges in Dublin on Saturday September 17th.

There are a number of buses organised from Donegal;

Activist Owen Curran explained; “It is important we get as many people as possible back on the streets again to re-focus the minds of politicians that we did not campaign and withheld payment of water charges for suspension -our campaign is about the abolition of water charges, and to make sure our water services remain in public hands.”

“The government have been on the back-foot almost since the beginning of the campaign; from the delaying of the charge in the first place ;to the temporary lowering of bills until 2018;to the introduction of the so-called conservation grant. Not forgetting the promises made by some in Fianna Fail in the run-up to the general election to actually abolish water charges.”

He concluded “This is why it is important that we ensure huge numbers turn out for this protest , quite frankly , it has been the mobilisation of thousands of people that has made this a issue that politicians cant ignore , and , it has been the visual and active campaign on the ground that has given so many householders the confidence to continue not to pay”.