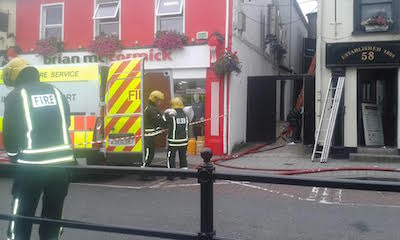 Emergency services at scene of fire at Letterkenny bar and nightclub

Gardai and the fire service are at the scene of a fire at the Central Bar on Main Street in Letterkenny.

The fire broke out earlier this morning around 6.30am but it is not yet known how the blaze started.

There are no reported injuries at this time.

The premises, which is owned by the well-known Blaney family, recently underwent a major refurbishment. 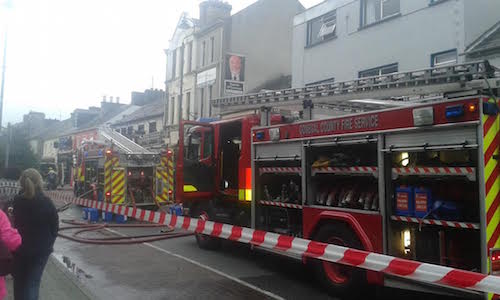 The scene of the fire at Letterkenny’s Main Street.

It is not known how much damage has been caused to the premises and adjoining buildings.

There are currently 3 fire tenders, 3 fire service jeeps, an incident support van, Gardai and ESB vans at the scene.

Traffic is being diverted from Gallagher’s Hotel as the Main Street is now cordoned off to traffic although pedestrian access is allowed.

The premises is a very popular location for locals and sports fans.

It is not known at this stage if any other premises connected to the bar have suffered any damage.

Chief Fire Officer, Joe McTaggart said the Main Street will be closed for another couple of hours up until lunchtime.

Mr Mactaggart said it is still not known what caused the fire but that his officers are currently dampening down a number of areas of the premises.

He appealed to business owners in general to check on all parts of their premises before locking up for the evening.

Emergency services at scene of fire at Letterkenny bar and nightclub was last modified: September 1st, 2016 by Stephen Maguire