A drug trial conducted by Alzheimer’s Research UK shows that a new antibody can break down Alzheimer-causing proteins in the brain.

This breakthrough rekindles hope for the 35,000 Alzheimer’s suffers and their families in Ireland.

Prior research has demonstrated that if scientists remove deposits of beta-amyloid, a protein which is found in the membrane surrounding nerve cells, it may slow the disease down, however previous attempts to break down the protein have failed.

However scientists recently discovered that the antibody aducanumab can target these proteins and break them down. 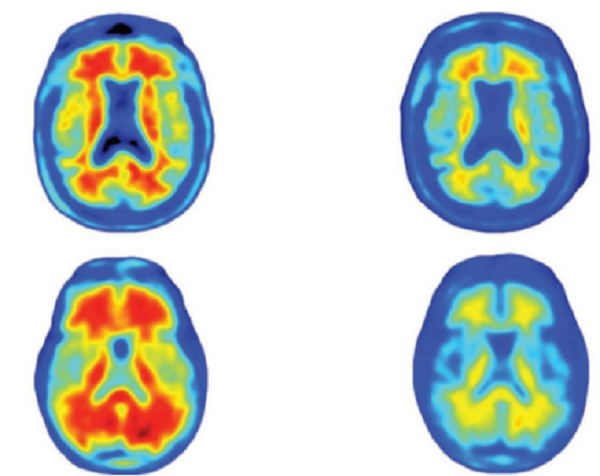 Brain scans of Alzheimer’s patients who took part in the trial – the amyloid protein, shown in red, was reduced dramatically over the course of a year

Alzheimer’s Research UK have already begun planning another clinical trial on a larger group of people.

At present the disease is only treatable as no viable cure has been found yet.

Dr James Pickett, head of research at the Alzheimer’s Society said; “These results are the most detailed and promising that we’ve seen for a drug that aims to modify the underlying causes of Alzheimer’s disease.

Dr David Reynolds, chief scientific officer of Alzheimer’s Research UK commented; “These results provide tantalising evidence that a new class of drug to treat the disease may be on the horizon”