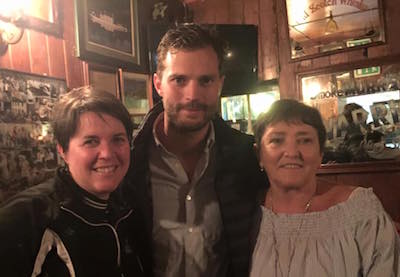 He’s one of the hottest actors on the screen.

And where else would he be but in the Olde Glen Bar in Carrigart.

A lot of heads turned when Mr Grey himself, actor Jamie Dornan turned up in the popular watering hole tonight.

The actor, who starred in both 50 Shades of Grey and The Fall, mixed with pub patrons and happily posed for photos.

Among them was well-known St Johnston artist Marina Hamilton and her mother-in-law Helen McClafferty.

Marina’s husband, well-known BBC reporter Enda McClafferty from Letterkenny, was tucked up in his bed unaware of all the fuss!

Ironically Jamie and fellow Irish actor Cillian Murphy appeared on this evening’s Late Late Show in what was a pre-recorded interview.