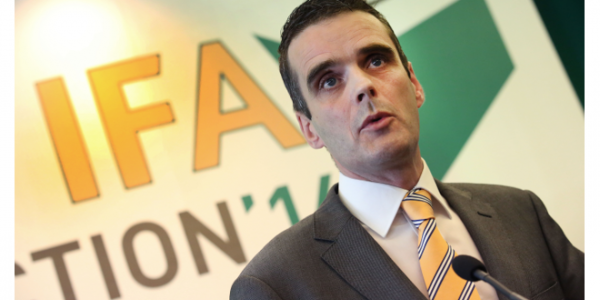 Joe Healy made his first official visit last week to Donegal since he was elected President of the IFA in March.

He visited farms in the South-West of the county in Ballintra and Dunkineely were farmers are finding it near impossible to cut silage or graze cattle due to water logged fields.

“The situation is very bad in many parts of Donegal at the moment and the reality is that unless we see some drier weather, we could be heading for a crisis in the sector,” said Mr Healy.

He added: “I am concerned about the number of farmers who are having to house cattle at this time of the year. However, I can see for myself that ground conditions are so bad, it’s just not possible to let them out.”

“If the weather doesn’t improve, this is going to be a major issue. It is placing enormous strain on many of our members at a time when they are already being impacted by poor prices and rising overheads,” Joe Healy said.

Mr Healy was joined on the visits by local farmers and IFA officers along with Donegal Chairman, Michael Chance who stated: “The President has been very receptive to concerns about the impact ground conditions are having on a number of farms in the county. I brought the situation in Donegal to his attention on Monday and he immediately made plans to be in the county this week. That is very encouraging to see and hopefully will result in positive supports being put in place for farmers in the county.”

Mr Chance said it was also important to consider the mental impact of the current plight of struggling farmers. It’s easy sometimes to cope with single issues but when there’s a combination of issues it can put farmers under extreme pressure. You have to consider the impact that is having on people’s mental health. It’s a very difficult situation to be in.”

IFA President – “We could be heading for a crisis in the sector” was last modified: September 5th, 2016 by Chris McNulty