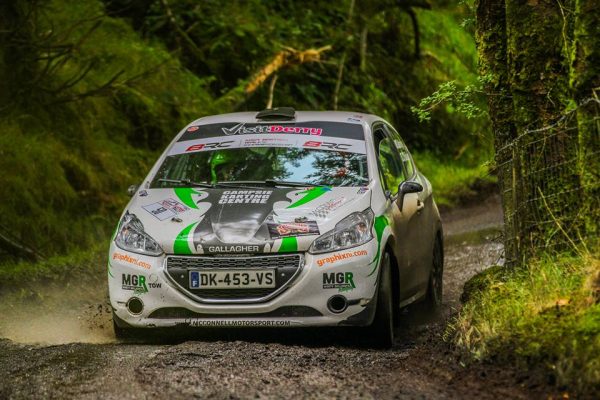 Rallying – Marty Gallagher in contention for the Manx!

For Donegal’s Marty Gallagher and co-driver Dean O’Sullivan, the trip to the Isle of Man next week for the MSA British Rally Championship- Manx International Rally is one that they are very much looking forward to.

The only Donegal crew to be contesting this year’s event they are equipped with a 1600cc Peugeot 208 R2 and they are treating their first trip to the island as another chance to learn as they build on the experience for a full 2017 MSA British Rally Championship attack.

“It’s three days, a long event, and we have never driven on the island so we need to learn the event.” said Marty.

It’s been an up and down season for the twenty year old as he upgraded to the R2 class from his successful sorties in a Honda Civic.

“There’s been a lot to learn this year. Many new events that we haven’t contested, the Fiesta R2, the 208 R2 and left hand drive, but things are starting to go well for us again. At the start of the year trying to compete in the Fiesta may have been a mistake. It didn’t have the power of the Peugeot’s. It was about 30 horse power down and we had a couple of off’s trying to keep up. Changing to the 208 definitely has helped.”

Indeed recent results have helped to propel Marty to third in the two wheel drive standings in the Irish Tarmac Rally Championship.

The year started well in Galway with second placed points on his first proper R2 event, but no points were scored in West Cork or Killarney after off-road excursions trying to keep up. On the Circuit of Ireland a very steady run brought third placed points, before things picked up with another second in Donegal as the change to the Peugeot 208 brough rewards. “We are still in the hunt when the bonus points on the final round in Cork are taken into account, and second place is very much up for grabs between myself and William Creighton. The Ulster went well for us and we scored second placed points to Callum Devine, and we were pleased to once again learn a new event and get round without any dramas in the tricky conditions. Also our times were right up there so it was very positive” said Marty.

“In the British Championship we are second in the BRC 4 class, and again we would like to maintain that position as a win isn’t possible after our non-finish on the Nicky Grist Stages in Wales.”

The Campsie Karting Centre 208 has been figuring highly in the overall standings, and a recent sixth overall finish on the Dogleap Stages at Shackleton has further boosted the teams confidence. They are also lying third overall in the FIA Celtic Trophy, and will be heading to Austria for the big shoot-out in November, with an exciting prize set to be announced for the winner. Seeded third two-wheel drive car at number thirty-seven on the International Rally Isle of Man, look out for the duo as they take on the challenge of the island’s roads for the first time.

“We need the experience of these events for next year, and we are still learning things with this car and it’s set up. Dean and the team at McConnell Motorsport have been great though, and hopefully we can continue our good run.”