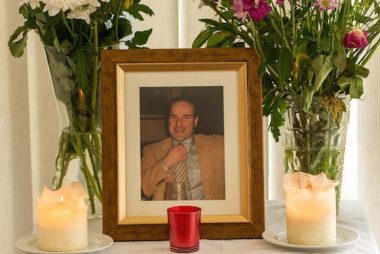 Inquest of tragic Garda hears how he was a ‘jolly, bright, family man’

An inquest into the death of Sergeant Michael Galvin who died in Ballyshannon Garda Station in May last year has returned a verdict of suicide.

Sgt Galvin’s death was the subject of a judicial inquiry, which found that the Garda Síochána Ombudsman Commission was mistaken to begin a criminal investigation into his actions and the actions of two colleagues following the death of a woman in a traffic inccident on New Year’s Day 2015.

He and the two other gardaí were cleared of all wrongdoing but had not been informed by GSOC.

Opening the inquest into Sgt Galvin’s death in Donegal town yesterday, Coroner Dr Denis McCauley said, following consultation with Sgt Galvin’s wife Colette and family, the inquest would focus on the day of his death as other issues have been investigated in another forum, RTE reports.

Garda Paddy Battle told the inquest that he knew Sgt Galvin for ten years as a work colleague and a friend.

He described him as a jolly, bright, family man.

They spoke about a work file and agreed to talk again in the morning – it was a normal chat, nothing unusual at all, he said.

Garda Claire O’Hara was on duty in Ballyshannon Garda Station and said Sgt Galvin went into his office at midnight.

At 4am she went to his office to ask about a file but he was not there and at 4.40am she said Sgt Galvin’s wife rang the station asking if he was still there.

Garda O’Hara said Sgt Galvin’s car was still outside and they checked all the offices but could not locate him.

She rang Supt Colm Nevin and told him that Sgt Galvin could not be found. Other garda members coming on duty joined the search.

He said it is so sad when there is evidence like this and the facts are known. The awful thing about suicidal feelings is that it is a temporary thing, he added.

Expressing sympathy to Sgt Galvin’s wife and family, Supt Nevin said “we miss him very dearly, he was an excellent sergeant-in-charge and a man of very high integrity