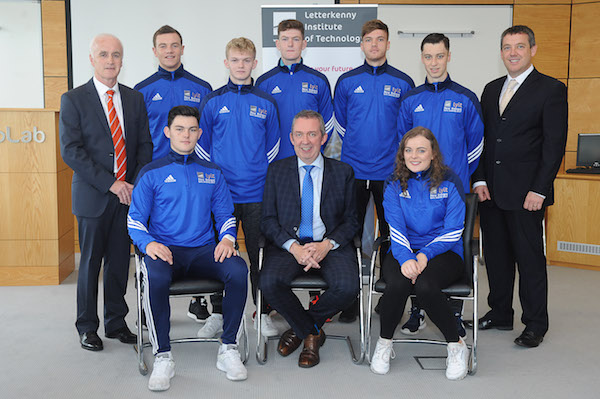 A total of 7 New Entry Sports Scholarships have been awarded to new students attending LYIT.

The New Entrant Sports Scholarship applies to all applicants that have been offered a full time course of study in the 2016-17 year and who have a proven sports background in either GAA or Soccer.

Having introduced the New Entry Sports Scholarship programme in September 2015, LYIT have benefitted from these awards and this year the institute has increased the number to 7 successful candidates, based on the application forms received from prospective students.

The New Entry Sports Scholarship is open to any second level student intending to seek a course of study in LYIT. The Terms & Conditions and the application form are available from the LYIT website and the information has also been referred to the Career Guidance Counsellors in each second level school in Donegal and neighbouring counties.

Indeed one of the Sports Scholarships was presented to Deaglan Foley who is a former student of North West Regional College in Derry. LYIT have established a link to encourage academic progression between both the institute and NWRC. Deaglan, who completed a HND in Derry will now continue his studies in LYIT on the BSc in Sports Coaching and Performance course and will help the LYIT Hurling team to build on their recent cup success.

This comes as a welcome development for graduates in the locality who may considering their future study options in Donegal. The main requirement in securing a New Entry Sports Scholarship is that applicants must be in involved in either GAA or Soccer at a representative level, the institute encourages applications from players, male and female, who have secured county honours at minor or Under 21 level in GAA or at League of Ireland Under 17 and Under 19 level in Soccer.

At a meeting the winning Sports Scholars, Paul Hannigan, President LYIT, congratulated those present and complimented them on their achievement in sport so far. Paul also wished the students the best in their studies and in a busy schedule of games in the intervarsity programme of sport.