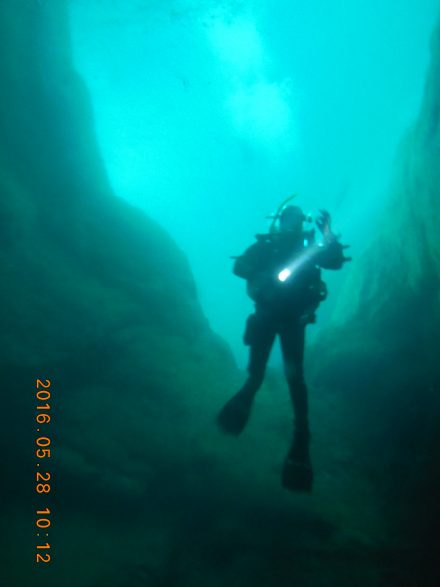 FEATURES: Sheephaven Aqua Club undertake a night dive on the night of the last full moon before the equinox

After  the  excitement  on  Monday  of  going  to  Killybegs  and  diving,  the  Shaun Sheephaven divers followed that, with a night dive, under the Harvest Moon on Wednesday
evening.

The last full moon before the September equinox is known as the Harvest Moon and along with some of the biggest tides of the year, this autumn it had a spectacular red hue.

Once again PortnaBlagh provided the ideal location for a night dive, with the divers never getting below 10 metres and well defined reference points provided by the reefs that run
out from the pier.

Also on the night the marine life lived up to expectation, as the Shrimp and Lobsters came out once again for their nocturnal prowl.

Weather  conditions  were  near  perfect,  with  cloud cover breaking  long  enough  for  the marvellous Moon to shine down on the dive site.

In‐water  conditions  were  also  near  perfect  with  warm  water  and  good  visibility  and  as would be expected afterwards a cup of tea in Dunfanghy to wind up a great evenings diving.

Maximum dive times of over 50 minutes were recorded, to a depth of over 20 metres and good visibility of nearly 10 metres horizontally in some parts of the dive site.

Sunday morning was very busy with a dive party to Melmore Head out from Mevagh, while in PortnaBlagh, Sheephaven Snorkelers welcomed the Garten Open Water Swim Group.

The one boat Melmore dive party was led by Ethel Mc Granghan and thanks to Ryan Ward, who kindly gave up his dive to take the helm of dive boat Áine, the dive was conducted in one stick.

The divers entered the water near Ravenney Island and followed the tide towards Melmore Head and once again marine life in the area put on a spectacular display.

First up was  a  lovely sighting of  a Pipefish, perfectly  camouflaged  in the Pod Weed  at 18 metres, followed directly after by an observation of an exceptionally large Plaice.

However these were trumped topside where the Sunfish were back and one put on a great show of breaching beside the dive boat and then stayed around long enough to allow Ciaran
Mc Glynn take another one of his classy videos.

Dive  times  of  over  50  minutes  were  recorded  to  a  maximum  depth  of  25  metres,  with visibility so good the divers could clearly see the dive boat from the sea bed at 18 metres.

Meanwhile  over  in  PortnaBlagh  the  Garten  Open  Water  Swim  Group  kindly  donated  a generous sponsorship of €700 to Sheephaven Search and Rescue fund, when they attended
the club Sunday morning snorkel.

Karen Crawford, Paddy Bond, Mark Mc Collum and Keith Mc Clean took the opportunity to recognise the support that Sheephaven SAC provided to them during the Open Water Swim from Horn Head to PortnaBlagh in July of this year.