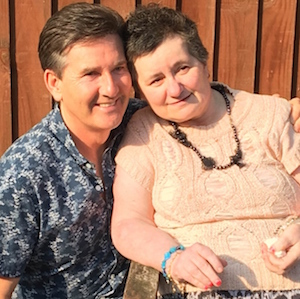 Stories of Daniel O’Donnell’s care for his fans are legendary.

And the singer has yet again put other people before himself with a stunning act of kindness.

Brigette Hill, who is recovering from a brain tumour, was devastated when tickets for her idol’s shows in Norwich were sold out.

But the singer made her day when he turned up at her care home alone and unannounced to spend time with her and her fellow residents.

The 58-year-old has been at the FitzRoy home for about a year and a half after having the tumour removed, and has been working hard on her mobility.

Staff at the Fitzroy care home said the visit by the Kincasslagh man on Wednesday was “unbelievable”.

“It was absolutely surreal – he turned up completely unannounced,” support worker Nick Jacobs told the Norfolk Eastern Daily Press. “I was in the garden and I could hear this male voice inside and wondered who it was.

“Then he just wandered through the garden. He was genuinely the nicest bloke I have ever met – he was so good with the residents and really took his time to speak with them.

“He sat outside with Brigette and let us all take photos, and just chatted to her.

“We brought out the other residents Linda and Richard and he really spent time with them and let them ask him all sorts of questions.

“It meant the world to Brigette because she absolutely idolizes him.

“She has his DVD and plays it every day, she is totally besotted with him.

“She was in tears and sobbing. The visit has made her whole life.”

The meeting came about after Ms Hill’s sister, Lesley Vernon, had tried unsuccessfully to secure tickets to the Theatre Royal shows. She then tried to reach out to see if there was any chance of a signed photograph, but Mr O’Donnell went one step further.

“It is unbelievable to turn up here completely alone to do something like that, I don’t know many people who would make that effort.

“It is an amazing thing to do,” added Mr Jacobs.

“Brigette used to be fairly able-bodied, and her life was completely changed by the tumour.

“She spent about 10 months in hospital after having it removed, and when she came to us she was completely immobile.

“Now she walks around the house and is getting her independence back. Her determination is so admirable.”

Ms Hill said after the meeting: “Seeing Daniel made me feel so happy. I love his music and always dreamed of meeting him.

“When I saw Daniel, I was speechless and crying for joy. I’ll never forget it.”