‘Tides – A History of Lives and Dreams Lost and Found (Some Broken)’, the film about the River Foyle wins two more awards on the same evening in two different prestigious film festivals.

The documentary won an Honourable Mention Award for Best Film in the section “State of Error” at Milan Film Festival and Best Film Soundtrack Award at Treviso Doc Festival.

‘Tides’ won the Honourable Mention Award with the following Jury Motivation: Judges at both film festivals were very impressed, with the jury at Milan Film Festival saying the film had ‘skillful experimentation that results in the ability to render through poetry and music the universal theme of the border’. 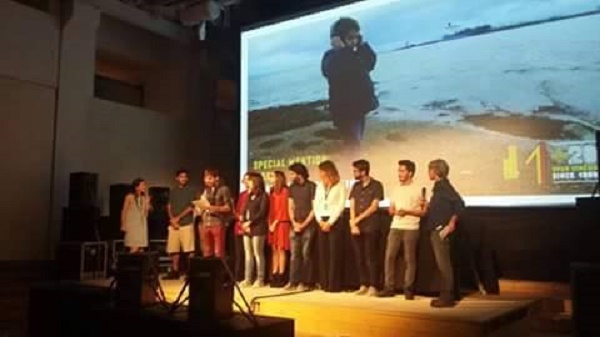 Similarly, judges in Treviso were wowwed by the film, calling it the soundtrack a ‘well conceived choice of few sparse original elements: the elegance of a delicate piano, occasionally conversing with an eerie waterphone, the discrete brush of a nylon-string guitar, all tastefully interspersed with touches of nostalgia via quotations of period music and voices from the past layered in mature and serene irony…. an ultimately enjoyable proof of creative coherence and depth.’

Alessandro Negrini, who attended the Award ceremony in the Palace of 300, said he was honoured to receive the awards. The film is an invitation to rediscover our capability to remember our forgotten dreams.

‘Tides’ is a dreamlike and visionary portrait of the River Foyle in Northern Ireland.

Supported by Northern Ireland Screen, Media and The Italian Institute of Culture in Edinburgh, the film is written and directed by Alessandro Negrini, director of the award winning documentary ‘Paradiso’. Director of photography is renown Norwegian OddGeir Saether (Inland Empire, David Lynch).