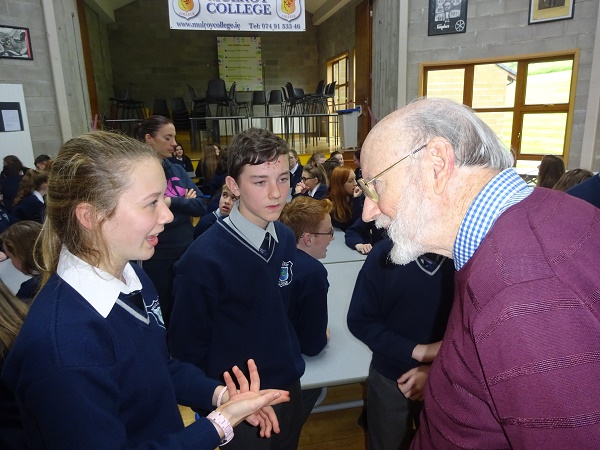 Excitement was building all day in the corridors of Mulroy College in Milford as students and staff eagerly awaited the arrival of Professor William Campbell.

Professor Campbell was awarded a quarter Nobel prize in Medicine in 2015 for his work with bacteria and a compound avermectin which can kill off the roundworms that cause river blindness. He is the second Irish person, after Ernest Walton (1951) to receive the prestigious award. 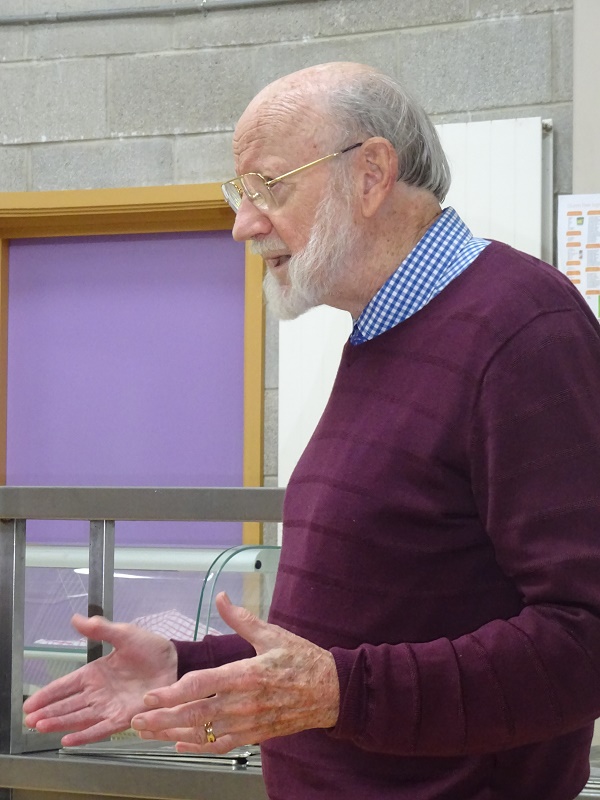 A pin dropping could be heard as Professor Campbell told students about his life spent growing up in lovely Ramelton and his work in Trinity College which cemented his interest in worms.

His collaboration with a Japanese scientist Satoshi Omura led to the amazing discovery of the microbe in soil samples collected in Japan. 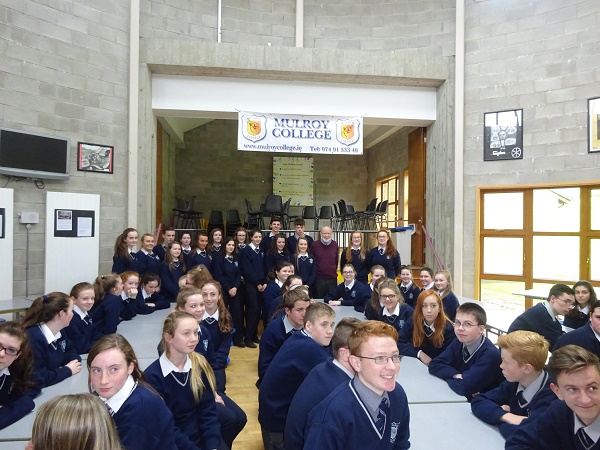 Students were regaled with tales of a fascinating professional life in science spanning five decades which led to the development and production of ivermectin, a chemically modified form of avermectin which has proven effective against a growing number of other parasitic diseases. 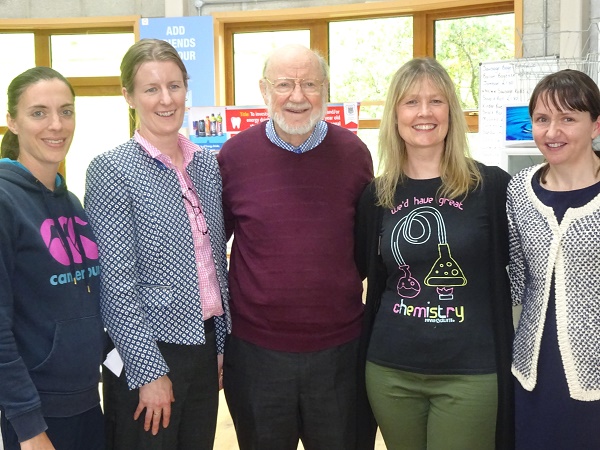 The science teachers with Professor Campbell; perhaps one of their pupils will be the next Nobel Prize winner?

Professor Campbell chatted with a number of students from Mulroy who themselves have been successful in the scientific field.

He was very interested to hear about their endeavours in the Young Scientist competition. Conor Bradley and Dylan Mc Bride spoke to him about their current project which scooped the top prize in Scifest Donegal recently. He wished them continued success in the national final in November. 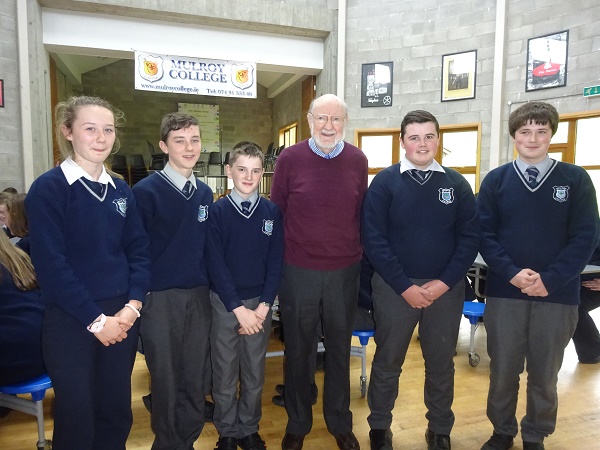 A student commented that ‘this was a chance in a lifetime to meet a Nobel Prizewinner’, while Conor Bradley mentioned that ‘I couldn’t believe that after finding the antibiotic, it took a further 17 years to have the drug acknowledged. One thing that I learnt was never to give up trying.’ 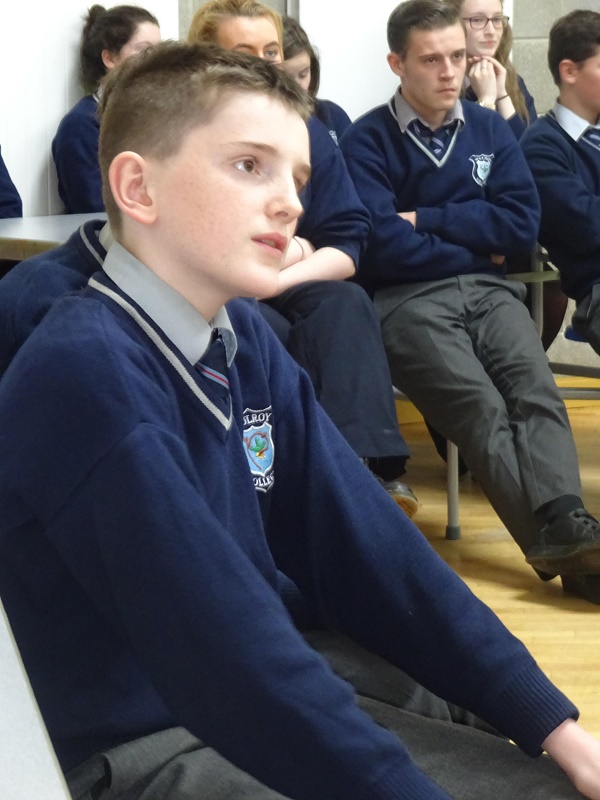 Everyone was very sad when the bell went to signify the end of the school day.

Students headed off buzzing with scientific enthusiasm. You never know, maybe the third Irish person who will win a Nobel prize was among that lucky group! 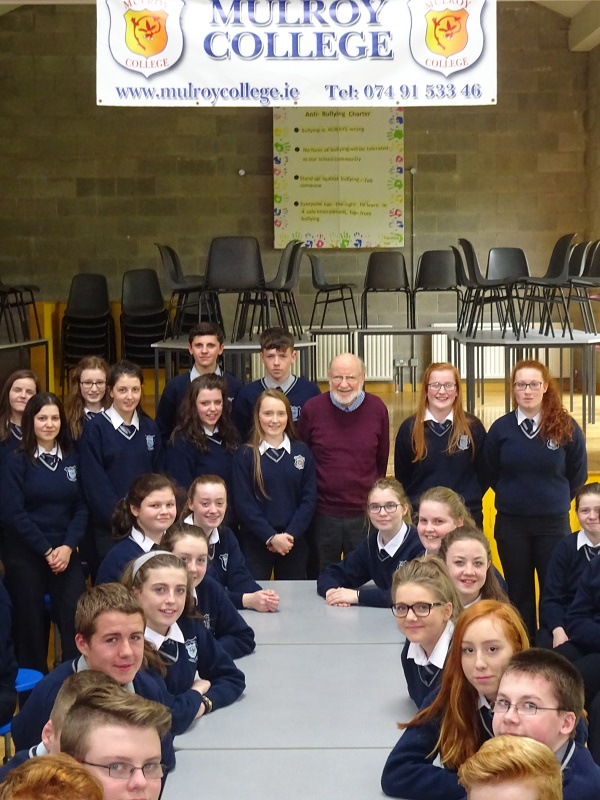 Principal, Fiona Temple, on behalf of the Science Dept openly thanked Professor William Campbell for sharing his experience with the students.

This was a historic day for the Science Deptartment in Mulroy College.