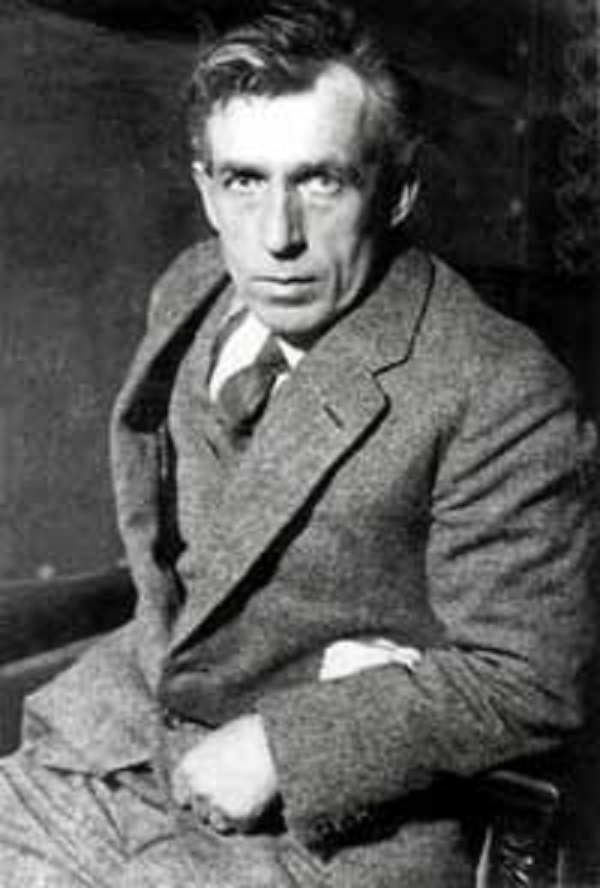 John Boyle, the first Vice-President of the Irish National Teachers Organisation from the Rosses, penned a captivating speech in memory of socialist Peadar O’Donnell.

Born in 1893 in Meenmore, outside Dungloe, Irish Republican, Peadar O’Donnell was a prominent social activist, a human rights campaigner, and a prolific writer.

Peadar O’Donnell, who was once county secretary for the Donegal branch of the Irish National Teachers’ Organisation (INTO) from 1916-1918 was fondly remembered at a special commemoration on Arranmore Island yesterday.

Thirty years on from his passing, people gathered to remember him and his work. 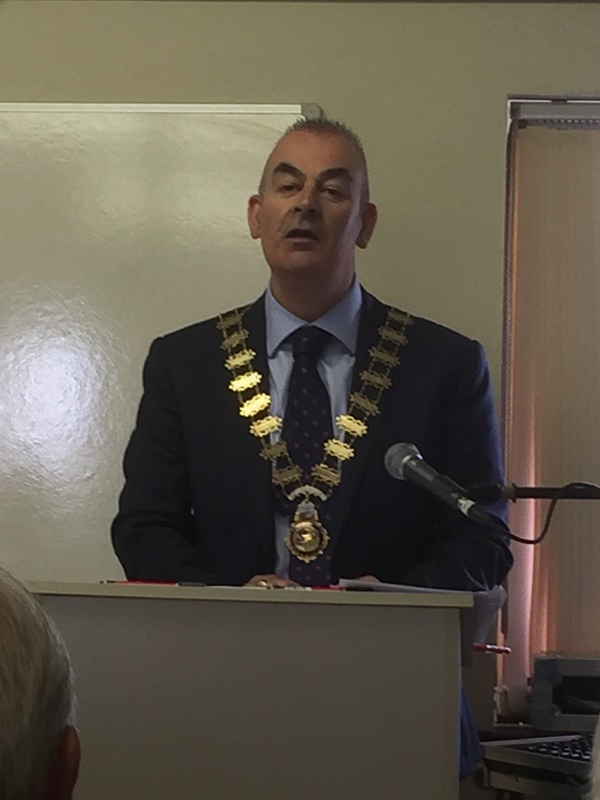 John Boyle spoke at the event, saying the following:

Reverend Father, distinguished guests, ladies and gentlemen boys and girls of Arranmore, our organisation, the Irish National Teachers Organisation, like most other organisations in the country have taken great pride in celebrating the centenary of 1916 throughout this year.

Apart from the wonderful work done by our members who have brought the legacy of 1916 alive for their pupils, our union has
also celebrated the events of 100 years ago with aplomb. We’ve held a number of events which I’ve been privileged to attend celebrating in particular the contribution of two leading INTO activists, who played very significant parts in the Easter Rising – Thomas Ashe and Margaret Skinnider.

Whilst these two heroes of The Rising, who also contributed handsomely to our organisation at national level, have been feted, we are mindful that other INTO members also played their parts around the time of the foundation of the state. Although Peadar O’ Donnell, one of our strongest nationalists and socialists was not involved in the 1916 rising,

I believe it’s entirely fitting in 2016, that Peadar O’Donnell’s life be celebrated here on Arranmore Island – thirty year after his death.

I’ll try to confine my remarks to Peadar O’Donnell’s contribution to the INTO, A dhaoine uaisle. The establishment of the Cope in 1906 – The Templecrone Co-op Society – by Paddy Gallagher is proof that radical, socialistic even socialist ideas- had reached North West
Donegal early in the last century.

This was not a mild step as Paddy The Cope had to defy merchants and their supporters the catholic clergy in order to achieve his objectives.

By 1911 echoes of Larkinism had reached Donegal. Derry being a trade union stronghold around the time Peadar O Donnell was studying primary education at St. Patrick’s College in Drumcondra.

Being born on a small farm in Meenmore would seem to be a remarkable and unlikely beginning for a left-wing radical. That he should begin his working life as a national school teacher in 1913 made it even more unlikely, school teachers in those days, if not today, being under so much pressure to conform.

Peadar O Donnell was never going to conform – he was not the first Rosses man of his type and certainly not the last! There’s no doubt that Peadar’s exposure to socialist revolutionary James Connolly and his exposure to works of Karl Marx, while in St. Pat’s impacted on the young Peadar.

But no more than in my own case in the Rosses of the 1970’s, I firmly believe that his formative years in Meenmore – his early family education and the resilience of a close-knit community experiencing intense poverty, imbued him with a strong social conscience and served to ignite in him the twin passions of socialism and nationalism that continued to be his motivating force until his death in 1986.

The fires lit in his youth by the parlous conditions of migrant potato workers like his father, gave steel to his determination to effect change.

Peadar’s maternal aunt was a member of INTO – she and his mother were devout followers of Larkinism. They both influenced Peadar to pursue primary teaching – about the highest degree of social mobility possible for a young Rosses man at the time. After finishing in Meenmore National School, Peadar was a monitor in Keadue NS.

He won a scholarship to St. Pat’s in 1911 and two years later returned to the Rosses to teach. At that time only national teachers, railwaymen and asylum workers had a strong trade union presence in Donegal.

As headmaster of Derryhenny NS near Doochary, O’Donnell continuously lobbied the Education Officer for improvements to the school building, to no avail. So at the end of June 1916 he and some friends demolished the dilapidated building, thereby forcing the powers that were, to build a new school. On leaving Derryhenny later that Summer to take up the position of Ard-mháistir here in Aphort,

Peadar wrote: “This marks the end of the first chapter of my life. I wonder when Autumn comes will it bring those lovely things that Spring has promised.”

Peadar became headmaster in Aphort’s new school on 27 th July 1916 and it was from here on Arranmore Island that he first came to the
notice of the wider public. His experience here shows how radicalisation spread after the execution of the 1916 leaders.

While teaching here Peadar set time aside every day for writing and as we now know from his many works including: ‘The Big Windows’, ‘Proud Island’ and ‘Islanders’, his time on Arranmore had a huge influence on him. Arranmore also saw the beginning of his trade union career as Peadar became involved in INTO while principal here.

His writings show an understanding of ordinary country people, their lives, aspirations and struggles. Peadar chaired the meeting at which the Arranmore Migratory Workers Union was founded.

During the Summer holidays, he then went to Scotland to observe The Tatty Hokers working conditions for himself. The short time in Glasgow exposed him to the realities of poverty and societal inequality, after which Peadar became a tireless champion of the common people.

Throughout 1917 Peadar wrote letters to the Derry Journal and made speeches at INTO meetings which show the influence of Marxism, which Peadar had picked up through James Connolly. The radicalisation of INTO in Donegal was reflected in Peadar’s election to County Secretary of the Donegal branch in July 1917.

The AGM passed 2 motions he had drafted – one which called for compulsory school attendance to age 16 supported by a house tax based on valuation.

It took nearly another 50 years until Sept 1966 before Donogh O’Malley delivered free secondary education and yet, to this day, primary schools have still not been provided with enough funding to cover the cost of the basic amenities Peadar’s resolution sought.

The second motion called for equal pay for female teachers, which illustrates what would become a constant pattern of fighting for women’s rights throughout Peadar’s life, as did James Connolly. It took nearly 60 years until Ireland was in the EEC, for Peadar’s
equality battle to be won with the passing of legislation on equal pay in 1974 and equality legislation three years later.

Peadar O’Donnell had the deep feelings of moral fervour of a man who believed in every way that his fellow Irishmen were as good, if not better than anyone else in the world. His campaigns on behalf of emigrants and small farmers, his involvement in the battle against
the urban slums – all of these led to real and fundamental improvements in the lives of a lot of ordinary people. He emerged as a
revolutionary in 1918 when he called on his fellow INTO members:

“Let us convert our schools into hotbeds, where working mens interests are fostered”.

That year the INTO affiliated to the Derry Trades and Labour Council. Peadar was elected Teacher’s Representative to the council providing him with broader contacts within the trade union movement. Soon afterwards he became a full time organiser for ITGWU – their great gain, INTOs huge loss.

As the first Rosses man to be Vice-President of INTO, I am proud of the work Peadar O’Donnell did within our union initially, for the trade union movement subsequently and throughout a long life fighting for working people and for social justice.

The fact that Peadar saw his pen as his main weapon in the revolutionary process, has endeared him to me and to many. His greatest battles during 60 active years of campaigning were won by his wielding of the pen, through his voice and creative gifts. He won many
minds towards the ideas of social, civil and cultural freedom envisaged by his heroes Tone, Emmet, Pearse and Connolly. His
private generosity benefitted many.

His encouragement and ability to empower and inspire transformed the lives of countless writers and activists. It’s impossible to know how many people were influenced by his writings, to view the world in a different way.

His influence and impact are seen long after the 20 th century. His insights into organising around socialist objectives within Ireland’s rural populace have not been surpassed since his death.

Were we to have Peadar O’Donnell as a young INTO member today in 2016, I have no doubt that he would be to the fore in leading the charge against educational inequality.

The fact that education spending in Ireland has fallen by 15% against comparable EU countries i recent years would really rankle with Peadar.

He would not accept the government spending of only 92c per schoolday on primary pupils versus €1.77 on secondary pupils; he would
fight tooth and nail to get rid of the two tiered salary system introduced for new teachers by the last 2 governments. He would have welcomed last week’s breakthrough, the second uplift brokered by INTO for new entrant teachers and no doubt this would have given him the strength to push on for total pay equality for all teachers and public servants.

Peadar would campaign to ensure that pupils in small rural schools, in marginalised urban communities, pupils with special needs, immigrant children and traveller children would be given every support necessary to reach their potential.

I will never rest until all we have an education system fit for the 21 st century with all the children of the nation cherished equally.

Neither would Peadar O Donnell have rested.

Peadar identified a huge weakness in the Irish economy in that it could not accommodate all the Irish people who wanted to be accommodated stating that the material basis for life must be in our communities first and then the other follows. Peadar O’Donnell’s
objectives for Irish education, the economy and society are my objectives.

In his 1975 masterpiece ‘Proud Island’, Peadar wrote about Arranmore islanders fight for survival against disappearing shoals fearing that:

“The island was going to scatter like a barrel that had shed it’s hoops, unless the herring came back”.

He need not have worried – the island where he first came to prominence is alive and well 100 years later and I have no doubt that many
more young Rosses men and women will take huge inspiration for centuries to come from Peadar O’Donnell’s legacy. He has certainly inspired me. Ar scath a chéile a mhairimid.