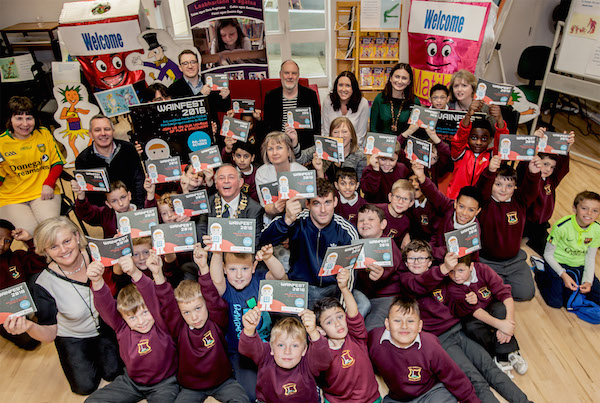 Wainfest 2016 got off to a great start on Friday when it was launched by well-known former Donegal GAA footballer Eamon McGee in the presence of very special guests from Mrs Daly’s class in St Colmcille Boys School in Letterkenny.

The boys from Mrs Daly’s class in St. Colmcille boy’s school waited in anticipated excitement as organiser Rory Gallagher on behalf of the Donegal County Council Library Service welcomed everyone to the launch of Wainfest 2016 with a special mention for the Cathaoirleach Cllr Terence Slowey and sponsors Evelyn McGlynn from Crafty Kids in Letterkenny.

In his address Cathaoirleach Councillor Terence Slowey stated that Wainfest embodies all that is core to the work of the Cultural Services division of the Council.

He said “Our culture has always been and always will be one of our enduring strengths. It helps to create a deepened sense of place, citizenship and pride of place in all sections of our society, including our very youngest members. Wainfest is one of the ways in which we reach out to children and young people”. 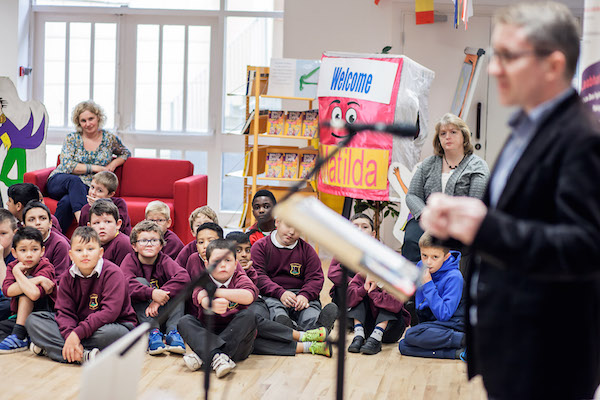 Pictured at the launch of Wainfest 2016 on Friday 23 September in the Central Library, Letterkenny was Librarian Rory Gallagher addressing the audience including special guests from Mrs Daly’s class in St Colmcille Boys School in Letterkenny.

Describing reading as the “window to the world” Cllr Slowey encouraged the children to take part in as many activities as possible during Wainfest which will see events taking place from the 8th to 15th October all over Donegal.

Programme sponsor, Evelyn McGlynn from Crafty Kids in Letterkenny also addressed the audience and said that Wainfest was the first thing on her calendar every year and Crafty Kids was delighted to be working to enhance children’s lives in the county.

Former Donegal footballer Eamon McGee described his passion for books saying that “it’s coincidental that “‘BFG’ by Roald Dahl was the first book I read on my own without the aid of my mother who gave me a love for reading.  It opened up a whole new world of fun and excitement for me and I still have a passion for reading today.” 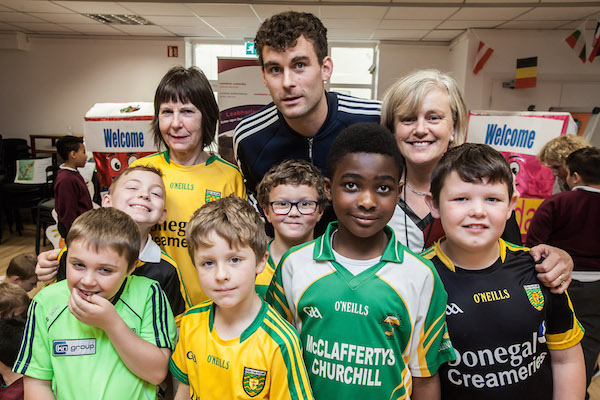 Donegal GAA fans with Eamon McGee pictured at the launch of Wainfest 2016 on Friday 23 September in the Central Library Letterkenny.

He then asked the boys to do him a favour, and read one book in the next week and of course each child responded positively and they all chorused “yes” to loud applause.

With this year’s extensive schools programme as well as family events there is something for everyone during his year’s Wainfest and parents, carers and teachers are invited to bring along their children to something tailored just for them.

However, as most events require pre-booking, early booking is advisable to avoid disappointment.