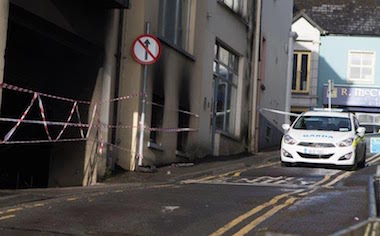 Up to eight cars damaged as blaze rips through underground carpark

Dozens of people had to be evacuated from an apartment block after a fire broke out in an underground carpark in Letterkenny.

Forensic experts are at the scene of the blaze which took place at Rosemount Lane off the town’s Main Street.

A total of nine cars were damaged as a result of the fire.

Gardai are now trying to ascertain if the blaze was started maliciously.

The area has been sealed off and a thorough investigation is due to commence shortly.

The fire started in the early hours of the morning and was not brought under control until around 5am.

A number of units of the fire service called to the scene.

The car park is beneath an apartment complex which contains 17 apartments.

All residents were evacuated and were put up in a local hotel overnight.

Garda Inspector Goretti Sheridan said “Thankfully nobody was hurt but we are appealing to anybody who was in the area at the time to come forward.

“We are currently viewing CCTV and anybody who may have any more CCTV to come forward. We have spoken to a number of people in relation to CCTV but if there are any more we would like to view it.”

There was nobody injured in the blaze.

The road from Main Street down to Pearse Road is currently closed as a result of the fire.

“It’s like the scene out of a film. To think that nobody was hurt is a miracle.

“There’s a lot of smoke damage but we have to get things cleaned up and try and open up again. I have five people working there and it’s obviously a worry for them and their families.

“We just have tho try and get on with it but my house will have to be completely gutted out and we can start again,” he said.