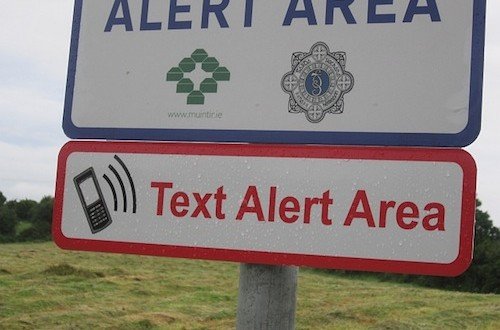 COMMUNITY NOTICE: A public meeting has been organised in Dunfanaghy, as locals step up their attempts to implement a ‘text alert’ crime prevention scheme in the area.

The meeting will take place at The Osman Centre, Dunfanaghy on Wednesday, October 12th next at 8pm.

Guest speakers on the night will be Vannessa Clarke from Munitir na Tire Crime prevention program.

Spokesman for the meeting Michael McClafferty told Donegal Daily, “Members of An Garda Siochana will be in attendance on the night to show there support for the initiative – and Lawrence Mc Manus of the joint policing board will be there to talk about the ‘text alert’ scheme and the benefits it has brought to his area of Pettigo.

“As this is all new to everybody round here in our area, I would like to invite people to come from all other ares as well who either have text alert set up or just to get information from the speakers on the night and ask questions to get informed.

“For example text alert can be used for other reasons also not just Crime prevention alone –  it could and can be used for Medical reasons for example, to alert First Aiders or first responders until an Ambulance or Doctor would arrive as down here were quite a bit from Lk Hospital.

“And that’s the real benefit is speed for somebody that falls ill – for example that’s when the golden hour may very well kick in when that hour of your life hangs in the balance either way.

“A first aider if near by gets a text that could very well keep you alive until the professionals arrive as was proved recently over in Falcarragh Golf course.

“This is how vital a text alert could work, if the community get behind it, on the night or subsequent meetings after wards as a committee needs to be formed 1st either on the 12th or later when people think more about what they have heard.”