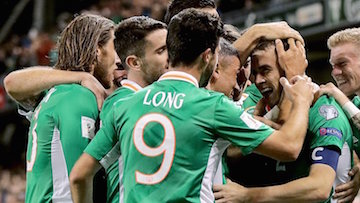 Captain Coleman the hero as Ireland beat Georgia at the Aviva

Seamus Coleman was the hero as Ireland overcame Georgia in this World Cup Qualifying game at the Aviva Stadium.

The Killybegs man captained his country and scored the only goal of the game following a determined if somewhat bizarre run inside the box which saw him literally walk the ball over the line.

The Everton star was awarded the man of the match award to round off a solid display to snatch three vital points with his first goal in a green jersey.

The final whistle saw Coleman greet his family including his dad in the crowd.

“It was fitting of the captain to get it today. He makes those runs all the day and it was a great goal,” he said.

Ireland put behind a very indifferent first half to push on a look for more openings in the second half to nick the game in the end.

Scrappy or not, Coleman will be delighted that he wore the captain’s armband when Martin O’Neill’s team chalked up three very important points.