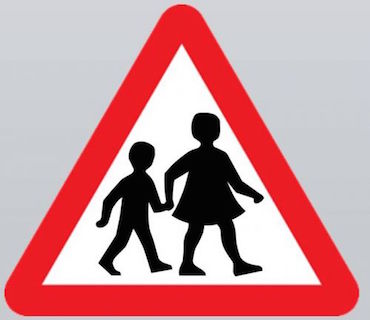 PARENTS have demanded new traffic calming measures on one of Donegal’s busiest roads after children narrowly avoided being hurt in an incident close to a school.

Motorists and parents have described the traffic at Illistrin outside Letterkenny in the mornings as “chaotic”.

And last Wednesday morning a number of secondary school children waiting to get a bus to Letterkenny just missed being knocked down.

There have also been a number of collisions at the junction involving parents of primary school children.

An eye-witness to the latest incident warned: “A bus had stopped opposite Illistrin shop to collect secondary school children.

“The kids have to cross over the N56 to get on the bus and as they were going across the road a number of motorists pulled out into a lane used for turning right – and not for overtaking – and just missed the kids who were stuck on a traffic island.

“There was no due care or attention from those drivers; they drove like mad people as if the children weren’t there.”

Another parent said reduced speed measures should be put in place during school run times.

“Getting out of Illistrin school and getting back onto the main road is like dicing with death half the time because cars are coming at full speed – and often at higher speeds – in both directions.

“Add to that the local people trying to join the road from the Ballyare road and it’s just chaos every morning from 8.30 to 9.30.”

Local people say a speed detection van is often deployed on the country-bound lane, but rarely at that time of the morning.

They want a new 50km/hr speed limit to cover all three intersections and junctions at Illistrin; and they want gardaí on duty there more often to manage the snarling traffic.

“It’s simple. A child is going to get killed if something isn’t done,” said another parent.

‘A child is going to get killed if road junction isn’t fixed’ was last modified: October 10th, 2016 by John2
FacebookTweetLinkedInPrint
Tags:
crashdangerGardaiIllistrinjunctionletterkennyROADS