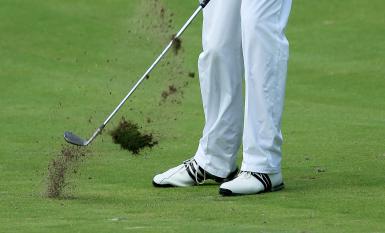 What a brilliant day for playing golf at one of Donegal’s most demanding yet truly enjoyable links courses, with it’s sun-kissed fairways and very little breeze that is so common for North West Golf Club. With the rough having been cut back and the greens fast and true, it was Strabane Golf Club member Kevin Keegan [19], playing in only his second Alliance, who topped the nett section.

Kevin must have thought that he was in for a poor scoring day when he ‘blanked’ the second [having bogied the first] but not a bit of it for he went on to record 19pts on the front nine and, taking the turn, he again started the inward nine with a bogey and a ‘blank’ but covered the remaining seven holes in two [2] over par, a remarkable turnaround for a 19 handicapper.

His 40 points, nineteen on front nine with a ‘blank’ and twenty-one on the back nine, also with a ‘blank’, was sufficient to put him top of the leader board above Eugene Corry [10], a member of the Newtownstewart G.C. Ulster Cup team who were recently beaten in the final of that competition.

Eugene’s runner-up spot was by virtue of B.O.T. from local member Mark Davis [6] who would rue that double bogey at the par three Fairy [16th], where many players made ‘2’.

In the Gross section, Brian McElhinney [+3] was again the star of the show as he followed up his -4 round in Ballybofey/Stranorlar on the first outing with no less than six [6] birdies at North West, his only blemish being a bogey at the newly constructed par four 4th hole. This misdemeanor led to a gross 65, five [5] under par.

Brian had two birdies on the front nine followed by consecutive birdies at 10th and 11th and continued with two more birdies at 16th and the par five 18th, just to finish off in style. Brian has recently taken up a golf teaching position at North West Golf Club and he is certainly preaching what he is teaching! Michael McGeady [+2] returned a level par round 70 gross to finish in the runner- up slot.

The unluckiest player of the day was Letterkenny Golf Club member Eamonn Davis who was a reported two inches [2] from an ‘ace’ [hole in one] at the Fairy [16th]. Having to settle for a birdie which, if his son Mark had recorded instead of double bogey, Mark would have won the competition instead of finishing in third place.