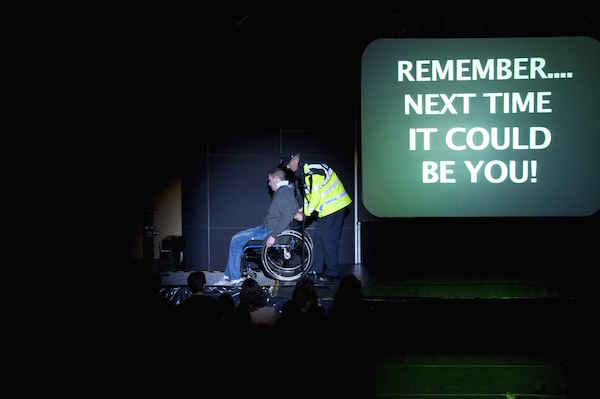 Carnage on Donegal’s roads – next time it could be you

The Donegal Road Safety Show has been delivering a hard message for the past 10 Years – ‘Remember, the next time it could be you.’

The award winning show is hosted by Donegal County Council in association with the Donegal Road Safety Working Group (DRSWG) and almost 3,000 young people will witness how a night out ends in tragedy for a 17-year old boy who has just passed his driving test.

Despite schools been extremely busy and having to cope with the demands of education, Principals consistently advise Donegal County Council that they believe that this is one of the most important initiatives hosted to educate their young students for the life ahead of them. It is a sad fact that almost everyone in this county knows someone who was killed or seriously injured in traffic collisions in Donegal.

This show offers our young people the opportunity to learn about the consequences of poor driving behaviour on our roads. Our hope is that this show will have a positive influence on them and help to keep them safe on our roads in the future.

Cathaoirleach of Donegal County Council, Terence Slowey said, “We believe that showing realistically what happens following a road traffic collision will have a strong impact on all of the young people who attend and will clearly show, that it could happen to them. The show is part of Donegal County Council’s ongoing commitment to improving road safety in Donegal and is targeting the group who are most at risk, young people who are just beginning to drive and often think they are indestructible. This show aims to positively influence these young drivers as they start out on what will hopefully be a long and safe motoring career.”

“Increasing road safety awareness is extremely important and saving lives on our roads requires persistence. Young and old must be taught about road safety – even experienced drivers need reminding of it on a regular basis. Young driver safety is a high priority especially here in Donegal and all of us are trying to find effective and acceptable ways of reducing the risk that these young people face. The educational approach we are taking is raising awareness among drivers who are generally focused on driving safely, but still need reminding of their responsibilities, but a different strategy will need to be found to tackle the reckless minority who wilfully take to the wheel while unfit to do so – or who deliberately drive in a dangerous manner”.

Road Safety Officer, Brian O’Donnell says “We have all been affected by the appalling loss of life on our roads recently. It serves as a reminder of just how vulnerable we are on the roads and that using the road is the most dangerous thing we do each day. Up to the last week of July there had been 1 fatal collision on Donegal’s roads, but over the following 8 weeks there were 9 more tragic deaths”.

“We need to get the message to our young people to stop and think. Before you get into a car with a driver who exceeds the speed limit, or someone who may be under the influence of drink, or who has taken drugs, or who is not wearing their seatbelts, or who use their mobile phone while driving; you need to stop and think. The trauma and devastation that is brought on your family and on the local community as a result of a road traffic collision is totally avoidable. I need to again repeat that no family should have to suffer the pain and loss of a loved one as a result of a road traffic collision”.

“Over the past number of years, road-users have worked hard to change their behaviour on the roads, for the benefit of all road users. However, to date in 2016, 145 people have lost their lives, 10 in Donegal. Since the show was first staged in 2007, 129 people have lost their lives on Donegal’s roads and of this number, 40 drivers and passengers were under 24 years of age, young lives cut tragically short”. “We all need to take responsibility for our actions on the roads, if we are going to reverse the current upward trend of road fatalities. We may place blame, give reasons, and even have excuses; but ultimately – we all need to improve our driving behaviour and how we use the road.”

Carnage on Donegal’s roads – next time it could be you was last modified: October 10th, 2016 by Stephen Maguire
FacebookTweetLinkedInPrint
Tags:
Aura Leisure CentreBrian O'DonnellcrashdonegalRoad Safety Event