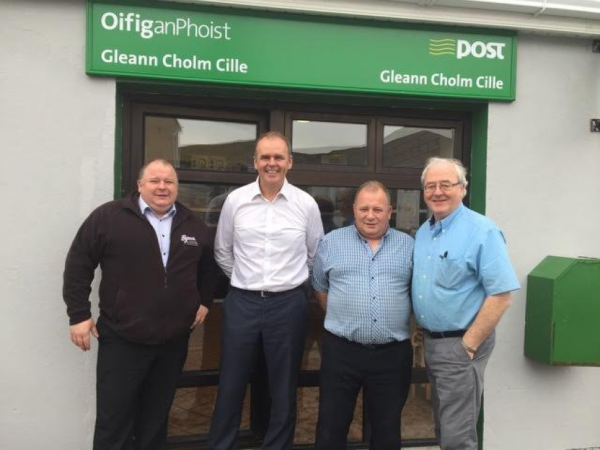 A rural Donegal community is celebrating after its local post office
reopened – just three months after it closed.

The 1,200 strong population of Gleann Cholm Cille feared the worst
when its local post office closed its doors in August.

The operator of the post office, Ms Annie McGinley, retired from her
position as post-mistress.

However, with no natural replacement, the post office closed its doors
with locals forced to travel at least six miles to the nearest other
post office in Carrrick to collect their pension, social welfare
entitlements or just to post a letter.

And this week, a well-known local family, reopened the post office.

The Byrne family, including brothers Adrian, Michael and Séamus who
already operate the local petrol station, undertakers and supermarket,
will now take over the running of the post office.

Liam Ó Cuinneagáin, a member of Gleann Parish Council said the
reopening of the post office has given further hope for the rural
community.

“Losing the post office was a big blow to the local community as both
the Breslin family and Annie McGinley gave tremendous service to the
local community over the years.

“To be fair to An Post, regional manager Peter Gillespie recognised
the need for a service locally and it is just great news that the
local Byrne family have taken it over once more,” he said.

Mr Ó Cuinneagáin said that, like many other rural communities across
the country, Gleann has suffered a weakening of its social fabric with
the closure of its Garda station and other services.

The locality, including its local Irish language school, has seen a
growth of both its commercial and cultural roots in recent months.

But there are still challenges including a lack of hotel accommodation
with the village’s only hotel, The Glencolmcille Hotel, closing five
years ago.

“We have to be positive. We are coming off the back of a very good
summer and the news of the reopening of our post office is another
reason why we should remain positive.

“It would be nice to have the hotel open again but we have plenty of
very good quality bed and breakfasts and budget hostels for visitors.

“Gleann is a seasonal village and so we must prepare for next season
already but all the indications and signs are that we have plenty to
be positive about,” he said.