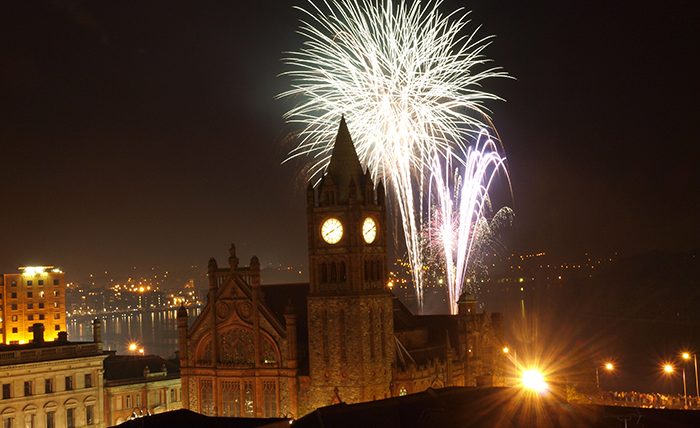 ‘Out of this World’ Halloween happenings in Derry and Strabane

Donegal people looking for spooktacular Halloween celebrations this year won’t have far to go as Derry and Strabane promise to host a party that’s ‘Out of this World’.

The City and District are planning a party like no other as it marks the 30th anniversary of their Halloween festivities.

The official “best Halloween destination in the world” is gearing itself up for the best celebration yet with a packed programme of events and activities for revellers of all ages to enjoy and participate in.

Among the key highlights of the festival include a welcome return of the Awakening of the Walls when the ancient City Walls will come to life with music, animation and light, creating a realm of fantasy fire and flame from Friday 28 to Sunday 30th October from 6-8pm each night.

Other highlights include spooky Gothic organ recitals at the Guildhall on the evening of Sunday 30 October, terrifying haunted tours at the Tower Museum, Weird and Wonderful Witches Tales at the Guildhall, a Halloween panto at Strabane’s Alley Theatre, Monstrous Halloween workshops and Storytelling at Strabane Community Library and family entertainment including mask making workshops and arts and crafts at the Craft Village.

New to this year is a Made in Derry Halloween focused food tour on Saturday 29 October from 12-4pm where you can adorn your favourite Halloween costume and eat and drink your way around the city centre and sample delights from over 30 different food and drink producers and venues.

On Halloween night Monday 31 October, both Derry and Strabane will host an evening of fun and entertainment when the City of Bones Street Carnival Parade will make its way along Derry’s Queen’s Quay from 7pm followed by a fabulous Fireworks Finale at 8pm, while in Strabane, the Upper Main Street car park will be transformed into a family friendly fun area from 7-8.30pm and a fireworks display over the River Mourne at 8pm.

Every year, the crowds are bigger, the music gets louder and the costumes get more creative making it an unforgettable experience for all who attend. So book now for a Halloween that’s simply ‘Out of this World!’. For more info go to www.derrystrabane.com/Halloween

‘Out of this World’ Halloween happenings in Derry and Strabane was last modified: October 12th, 2016 by Rachel McLaughlin
FacebookTweetLinkedInPrint
Tags:
DerryfestivalfireworksHalloweenstrabane