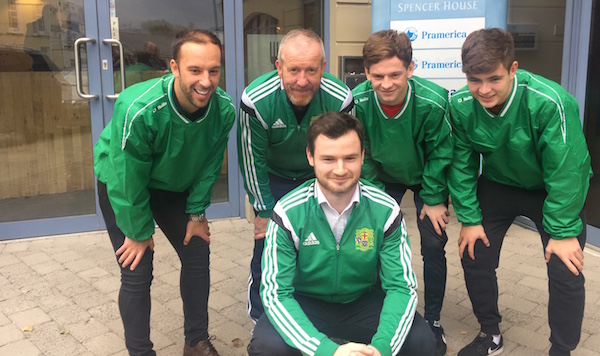 Peter Moran: “To come so near and miss out, it’s a difficult one”

Peter Moran says the Ulster Senior League can be proud of their efforts at this weekend’s FAI Intermediate Inter-provincial Tournament in Cork.

The USL selection just missed out on collecting the Michael Ward Trophy after going down to a 2-0 defeat to Munster, who took the silverware for the second year in a row.

Wins over Leinster (3-1) and Connacht (2-0) gave the USL a real chance of winning the prize, but Moran’s men had the Cup snatched from their grasp.

“It’s a hard one to take given that we were so close. We had played so well and battled so well over the three games. To come so near and to miss out, it’s a difficult one.

“We made two mistakes and Munster punished us. We didn’t deal with a ball over the top for their first goal. The penalty was iffy, but that’s me maybe clutching at straws a bit.”

Moran said: “There are so many pluses to take from the weekend. We really do have massive pluses to take. We changed the team all weekend and anyone and everyone who came in did a brilliant job for us.

“No matter who was in or out, they all performed well. We might have been missing a bit of experience and that probably cost us a little against Munster, but the young lads all did a superb job.

“We always said that we weren’t going down just to make up the numbers. From the first day we met, the lads all bought into the professionalism that we’ve tried to bring in. They took everything on board.

“It’ll fry my head thinking about things we could have done differently but, by and large, it was a great weekend.

“The lads were immense. They really were. It was a very enjoyable weekend away; it’s just a shame we didn’t get over the line.”

Peter Moran: “To come so near and miss out, it’s a difficult one” was last modified: October 16th, 2016 by Elaine McCallig