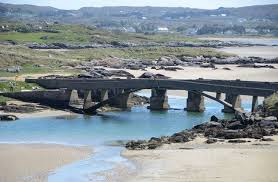 In an interview today on RTÉ Raidió na Gaeltachta, musician Mairéad Ní Mhaonaigh said that the community stood together against the planned oyster farms for the northwest, in An Céideadh and Cruit, and that they must keep up the pressure against the plans.

In total, 3200 objections to the oyster farms in An Céideadh and An Cruit were received.

“It took us by surprise when we heard about it (the planning application), because it was almost through already … and it was people from outside the area who would gain.  There are a lot of people around the Rosses and Gaoth Dobhair who use that area, because it’s a beautiful place to go walking or to bring your children, a safe place to swim…”

“When you think that we’re trying to entice tourists here with the Wild Atlantic Way, that would ruin the landscape.”

3200 objections were received for the 2 planned applications in question, and Mairéad said that was a great source of pride for her.

“I’m really proud, it’s great that the community came together and protested strongly against the plans.”

Speaking of her own objection, she said that she was totally against the farms as they would ruin the landscape, and that it would be more difficult to entice people to the area, and also the fact that the local community would not profit from it.

“The community is united and that’s a great thing.  I don’t think it’s going to benefit the areas of Céideadh or Cruit to have a farm like that.  The people’s voice is the most important thing here, and I hope we’ll be listened to.”

Mairéad Ní Mhaonaigh lives in An Charraig Fhinn in the Rosses area.

She was interviewed today on RTÉ Raidió na Gaeltachta.