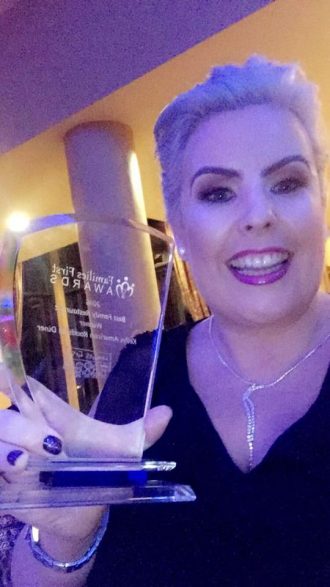 Kelly’s American Roadside Diner at Mountain Top, Letterkenny has added yet another award to its already impressive list of accolades.

Restaurant Manager Leah McNulty tells us she and her team “are extremely proud and most thankful to be awarded the prestigious “Best Family Restaurant 2016” at the Families First Annual Awards Ceremony held on Friday night past in Jackson’s Hotel, Ballybofey.

Families First is a thriving home grown company that literally puts families to the forefront of everything they do and their annual event gives parents and families their say in recognising the brands, restaurants, activity centres, educational facilities and products all the family love and feel deserves recognition.

The Diner’s valued customers had nominated the restaurant for this award in early Spring this year, followed by a judging from mystery auditors and online votes collectively ranked Kelly’s American Diner the Best Family Restaurant in the North and West of Ireland. The award presented on Friday night is a celebration of the exceptional service and unbeatable value the restaurant demonstrates and is recognised throughout Northern Ireland and right along the west coast to Galway.

Mairtin Kelly owner of the Kelly’s Complex told Donegal Daily, “Kelly’s American Diner caters for every budget and boasts an extensive menu including our famous Steak Saturday’s and ever popular Early Bird Breakfast.

“The massive menu of Milkshakes and Slushes offering over 24 different flavours, the introduction of the Heavenly Zone menu earlier this year along with complimentary dvd players, unlimited juice and ice cream with all kids meal deals sets the restaurant apart as an exceptional experience for the whole family.”

In addition to the “Best Family Restaurant 2016” award, the team at Kelly’s are this week being presented with their “Customer Service Excellence” award. This award is testament to the teams dedication to excellence where they ensure customer service and delicious food is placed at the forefront of their proposition. This award is a fitting tribute to their hard work and commitment for excellence.

After picking up the Families First “Best Family Restaurant 2016” Award at Jackson’s Hotel, Manager Leah McNulty told Donegal Daily, “We are extremely excited and delighted by this honour, to be recognised as the best is so humbling.

“I would like to congratulate the Kelly’s American Diner team for this award and also take this opportunity to say a heartfelt thank you to all our loyal customers for the nominations and votes. We look forward to continue to provide the best experience and fresh wholesome food at affordable prices to you all into 2017.”

As a Thank You to all their customers Kellys American Diner are offering *Free Kidz Meals* to all Under 10s this Sunday 23rd of October and look forward to seeing you there!