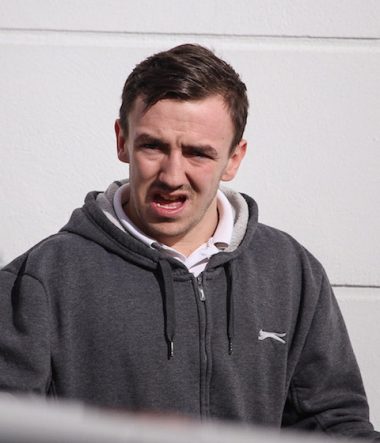 A promising young boxer who shot and injured a jogger has escaped jail.

The shooter, Darren Kelly, appeared before Letterkenny District Court today charged with possession of an article with intent to cause injury.

Kelly, 21, initially appeared in court last February where he pleaded guilty to the charge

The court had heard how a jogger was out with friend in Letterkenny at 9.30pm on October 2nd, 2014.

He felt a sharp pain to his head and he initially thought he had been hit by a stone from a passing car.

The man then noticed a black VW Passat passing him by and a man was in the passenger seat holding a gun.

He got the registration of the car but it managed to speed off.

The injured man immediately went to Letterkenny Garda station and reported the shooting.

Pictures of the jogger’s injuries were handed into court.

Inspector Sheridan said the gun, understood to be a pellet gun, had the capability of piercing the skin.

Solicitor for Kelly of Ard McCool, Stranorlar, Mr Patsy Gallagher, said his client was under the influence of other people in the car.

He said his client was very sorry for what had happened saying he was a man of considerable talent in the boxing ring.

He asked for a period of time to compensate the victim.

Judge Paul Kelly said “This was extraordinary behaviour going around with a gun in a car shooting at people.”

He adjourned the case until today after ordering a probation and supervision report on Kelly.

The court heard how the victim’s skin had been pierced but he had recovered fully from the incited.

Judge Kelly said he had read the report and was satisfied that he had met the matter fairly.

“He has applied fulsomely with the probation service and basically has done everything asked of him and his intensions for the future are genuine,” he said.

He applied the probation act on all charges.