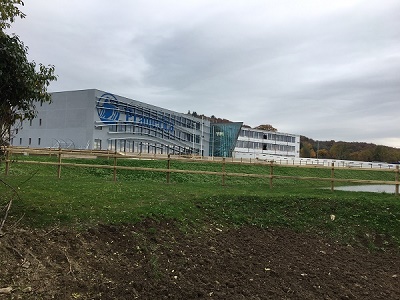 Pramerica to bring 300 jobs to Letterkenny

Pramerica are set to bring 330 new jobs to Letterkenny by next summer at their new state of the art premises near Windyhall.

Pramerica are a business and technology solutions company for the US based Prudential Finance, which has assets worth over one trillion US dollars under their management.

A new state of the art premises is beginning to take shape just one kilometer away from Pramerica’s current Donegal premises in Windyhall, Letterkenny. As the company is ever-expanding, up sizing is needed to accommodate more staff.

The new facility, equipped with its own lake, will officially open in summer 2017.

The company began in 2000 with just eight employees.

Currently they employ 1,400 people, and are hoping for this number to reach 1,800 over the next three years.

Pramerica’s aim to have 1,800 employees, which is as many as Microsoft have, means that they are set to become one of Ireland’s biggest employers.

Speaking to thejournal.ie, Caroline Faulkner says; “Pramerica is delighted that we have reached this historic milestone just 15 short years since we launched our business in Letterkenny with eight employees.”

Faulkner, the former senior managing director and chief information officer at Pramerica Systems Ireland, added; “We currently employ more than 1,200 people who are dispersed in four buildings. The new facility will bring them together in a single location.”

“In addition, it will give us the space we need to bring on approximately 330 new staff members over the next three years. The new job opportunities will include senior IT managers, project managers, business analysts, data scientists, actuaries, accountants and a wide range of technology support and professional services roles.”

Although many large companies are based in larger cities around the country, on their website Pramerica say; “Letterkenny is the ideal staging point for excursions around Donegal, Ireland’s wildest and most beautiful corner.”

Become a member of the ProAmpac Team!