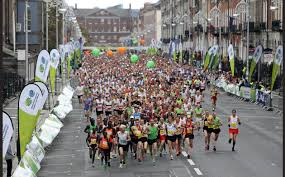 In ideal running conditions, 16,825 runners lined up for Sunday’s Dublin City Marathon. The event, after being run for 36 consecutive years on October Bank Holiday Monday, was this year moved to Sunday. This had a positive effect, with 5700 international runners taking part.

The Dublin Marathon is now the 4th largest Marathon in Europe.

Like most years, there was a substantial Letterkenny Athletic Club presence.

2012 London Olympian, Catriona Jennings, took 2nd place in the Irish Championship,  which is subsumed within the main event. Her time of 2.44.59 saw her claim silver, ahead of last year’s Irish champion, Pauline Curley of Tullamore Harriers.

Patrick Brennan had an excellent time of 3.15.51. Darren Beecroft was delighted that his conscientious training resulted in a Personal Best of 3.23.11. Marie Boyle’s dedicated training was also rewarded with a PB, of 3.23.37.

Marie finished 32nd out of the 1189 runners in the highly competitive F35-39 category,  meaning that she was inside the first 3% in her category. Marie said she was “delighted” and that “it was great to have the club support.”

Adrian Callaghan also had a fine run and, immediately after posting 3.24.33, he sped off to be with his wife, who is expecting their second child in the very near future.

Monica McGrenaghan was rewarded for her rigorous training programme with a PB of almost 20 minutes when she clocked 3.27.56. Monica competed well in the F40-44 category and, like Marie, finished in the top 3% in her category, by finishing 31st out of the 1332 runners. Afterwards, a delighted Monica declared, “What a good year it’s been and today was the icing on the cake!”

Seamus Morrison had an excellent time of 3.29. Marathon debutante, Eugene McGettigan, came home in 3.36. Speaking afterwards, Eugene declared himself “very happy.” He “tried to stay with 3.30  but found the last 12K very tough.”

Another marathon debutante, Barry Mackey,  declared himself satisfied  with his time of 4.06.47 and Barry will be confident that he can use this as a base for future marathons. Brian Ward came home in 4.19.29.

Pauric, now  with his local club Inishowen AC, picked up first prize in the M50 category with a time of 2.35.03.

Peter McLean returned to competing in the Letterkenny parkrun on Saturday. He finished in 27.46 after taking part in his 28th parkrun in Letterkenny. Peter had missed last week’s 5K but did so for the most altruistic of reasons; he was volunteering his services as a steward in order to give something back. Paul Lee fulfilled that role this week.

Cathal Roarty made a highly successful Letterkenny parkrun debut. He finished in 4th place in a time of 24.16.

3 Letterkenny AC runners will be competing for the Republic of Ireland in Tollcross Park, Glasgow on Saturday November 12th in the 5 Nations Masters’ Cross Country International. Best wishes from all at LAC go to Annmarie McGlynn, Fionnuala Diver and Ciaran Doherty. The 2 LAC  ladies will comprise 50% of the Irish W35 team and Ciaran will compete for the M40 team.