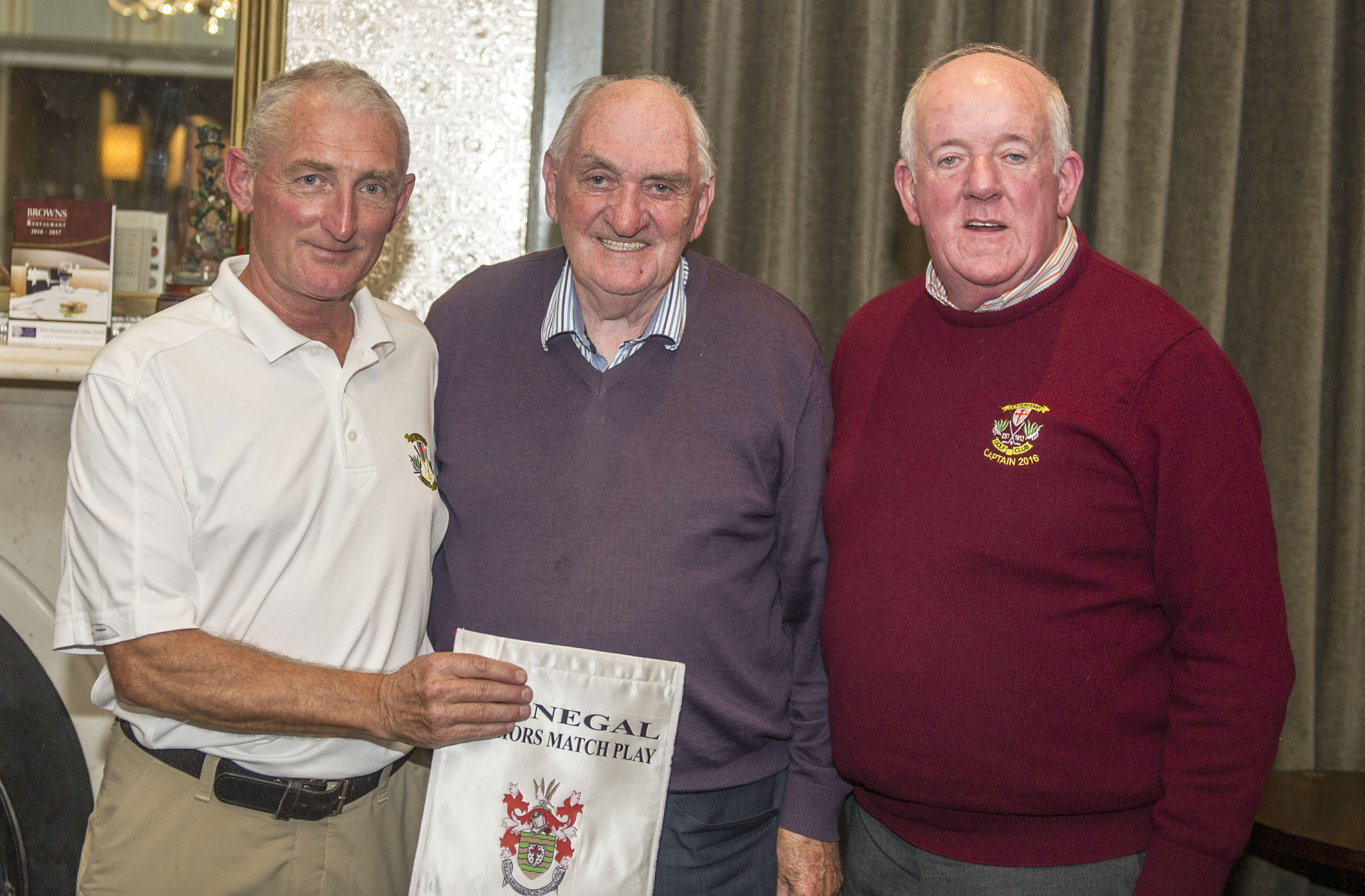 LETTERKENNY GOLF NEWS: CONGRATULATIONS to team captain KEVIN KIELY and the club’s ‘SENIORS’ who have retained the DONEGAL SENIORS CHALLENGE PENNENT by defeating local neighbours Portsalon GC. in Barnhill with a 3&1/2 to 1&1/2 victory.

With three matches required from the first leg result of 2&1/2 matches each, it was Kevin’s shrewd pairings for the first two matches of John Doran & Eamon Mc Glinchey winning 4&2 and second pairing of Pat Boyce & Joe Coyle winning 5&3 that set the tone for the win. With Danny Mc Laughlin & Ciaran Williamson winning on 16th, 3&2 and Ed Margey & Michael Nelis coming through with the half match it was unfortunate that the pairing of Keith Spence & Eamonn Davis were beaten 1down but the pennent was staying in Letterkenny for the second year in succession. In his victory speech afterwards, Kevin congratulated both teams for their sportsmanship, gentlemanly conduct and quality of golf displayed during both matches and proffered every success in the competition next year.

The Halloween weekend of golf saw two of the club’s ‘low’ men take the honours with Saturday belonging to Darragh Mc Menamin [5] whose 20pts on front nine consisted of birdies at Hall Door [1st] and Swilly [3rd] before a ‘blank’ at 7th [The Isle], but Darragh continued his inward nine with birdies at 10th, 15th and 17th for 23pts, an overall 43pts. and a one [1] under gross. In runner-up spot was juvenile member Patrick Page [6], returning a one [1] over gross 73 with the help of  back-to-back birdies at 11th and 12th holes and again at 15th and 16th holes for 18pts and 24pts respectively. In third place was club competition convenor, P.J.Nee [13], whose 22pts on front nine was followed by a birdie at 11th for a 40pt. return.

Sunday 30th confined had cat 3 member Michael Boyd [17] taking top spot with the help of 20pts on front nine, despite a ‘blank’ at Crievesmith [9th], but his 19pts on back nine for a 39pt winning return was enough to pip runner-up Graham Donaghey [13],whose birdie at Hall Door [1st] was followed by a double bogey at Glebe [2nd] for an 18pt outward nine followed by 20pts on back nine, his 38pts relegating Damian Redmond [22] to third place by virtue of b.o.t.Gross prize was won by Martin A. Gallagher [7] with 30pts gross.

The bank holiday Monday Open produced a ‘tour professional’ like performance from single figure handicapper Simon Stephens [2], whose scorecard is one that is usually read only on Sky Sports T.V. golf. Recording a magnificent three [3] under gross 69, Simon’s card showedback-to-back birdies at 1st and 2nd holes for a two under par outward nine, an eagle at Settlement, par five 11th for a four [4] under par score thru fourteen holes, his only blemishes coming at Candalabra [15th] and Aughaninshin [17th] holes with bogeys before finishing in birdie style once again on 18th. Simon’s 42pts gave him a two point margin over Charles Mc Hugh [22], finishing on 40pts.

Low Fuel Card Irish Junior Tournament held at Clandeboye Golf Club on Monday last. Following on from his u18 Munster Cup win during the summer tournament, Patrick returned a one over par 71 gross to take the u18 Halloween title. Congratulations to Patrick and all those club juveniles who played in the Halloween tournamentorganised by Clandeboye GC PGA P.R.O. Michael Gallagher.

Organiser Anne Condon would like to thank everyone for supporting the race night on Friday last. Thanks to all who sold, bought, sponsored and helped at the event or came to support. We had a good night and have raised almost €2,300 for club funds.