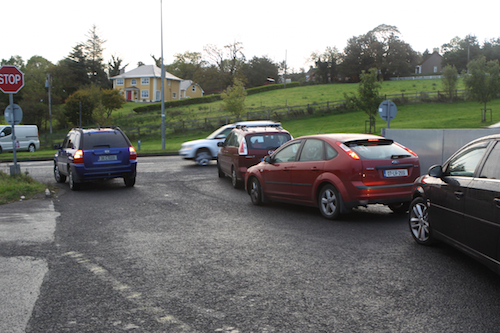 Hundreds of parents at a school outside Letterkenny are hoping a periodic speed limit will safeguard their children on what is one of the busiest roads in the county.

A meeting at Illistrin National School, which has 550 pupils, was arranged this week to discuss safety measures for children and parents using the local N56 Mountain Top Road.

The road currently has a speed limit of 100kph which the majority of parents say is excessive.

The Tirconail Tribune reports that parents were unanimous in their support of a permanent reduction in the speed limit.

However, they reluctantly accepted that their preferred solution to address traffic problems in the vicinity of the local national school will not be introduced in the short term.

Instead a periodic speed limit during the school day now looks the most likely option but it still has to be given the green light by Transport Infrastructure Ireland (TII) which has responsibility for the N56 Mountain Top road.

This will display 60kph on either side of the Illistrin junctions for 30 minutes before school starting times in the morning and will also be turned on for 20 minutes for the separate early and late collection of children in the afternoon.

The N56 Road from the Mountain Top currently has a 100kph speed limit. Safety concerns have been increasing over the past couple of years with over 550 pupils now attending Scoil Naomh Fiachra.

However on Tuesday night residents, parents and businesses in the area heard from local Cllrs that a permanent reduction in the speed limit to 60kph would be rejected by the TII.

While supporting the very clear wishes of the meeting Cllrs Jimmy Kavanagh, Liam Blaney and Ciaran Brogan said the best option in the short term was to back the proposal for the periodic speed limits.

The meeting also agreed that an Action Group would be formed to liaise with the Cllrs and meet staff from local road design office to discuss additional safety measures that could be implemented in the vicinity of the Illistrin junctions.

The Deputy Principal at Scoil Naomh Fiachra Doreen Kennedy said the traffic problems at the school had been ongoing for the past decade since the opening of the new upgraded N56 road from the Mountain Top was opened as well as the huge increase in pupil numbers in recent years.

“It’s awful here for everyone. Everyone one of us is taking our lives in our hands every day getting in and out of the school on this road” Ms Kennedy said.

Scoil Naomh Fiachra now has biggest enrolment numbers in the Letterkenny area. Doreen Kennedy was joined at the top table by meeting organizer Tommy Doherty and both made pleas to the local Cllrs to back the calls for the introduction of meaningful traffic calming measures in the vicinity of the school in order to avoid a serious incident.

Parent Sinead Bradley told the meeting that the only solution was a 60kph speed limit pointing out that the Council proposal would only lead to further confusion.

That was view was endorsed by local resident Tommy McLaughlin who said drivers are being distracted by other things meaning that the periodic speed limits would be for the most part ignored.

Mr McLaughlin pointed to the dangers for traffic trying to cross on the Mountain Top to Illistrin road due to the100kph limit and the two climbing lanes. He called on the Cllrs to put the pressure on TII to implement a permanent 60kph limit.

Speakers also raised the fact that there was a 60kph limit through Termon where the chapel is located.

Meeting organiser Tommy Doherty said Illistrin was a much busier area because of the school and should at least have the same speed restrictions. However, he was told that Termon limit was in place before new guidelines were introduced some years ago by the TII’s predecessor, the National Roads Authority.

The meeting was also addressed by road safety campaigner Mary Clinton who said her research show the speed limits around schools in Ireland were much higher than some other countries.

Close to 2,000 people have signed a petition supporting the 60kph speed limit while members of the public have also been making individual submissions to the Council on the matter. The consultation period on the periodic speed limits proposals is next Monday the 7th of November.

The organizers are encouraging as many people as possible to sign the petition at Kelly’s Shop in Illistrin or make their own private submissions to the Local Authority.

The meeting was attended by Fianna Fail Deputy Charlie McConnalogue who was joined by Cllrs James Pat McDaid, Liam Blaney and Ciaran Brogan along with Independents Michael McBride and Ian McGarvey and Fine Gael’s Jimmy Kavanagh.

Cllr McBride said ultimately a roundabout would be the ideal answer to slow down traffic but he acknowledged that was unlikely to happen while he felt a permanent 60kph speed limit would not be put in place in the short term.

The Mayor of the Letterkenny Municipal District Cllr James Pat McDaid said a Council delegation would be meeting the TII in Dublin next month and his party would be lobbying there for the permanent speed reduction. Independent Cllr Ian McGarvey said Ilistrin had been rightly described by the public as a ‘death trap’ and it was now time to address the key issues that had been clearly highlighted during Tuesday night’s meeting.

While acknowledging that it wasn’t what people wanted to hear Cllr Liam Blaney said there was realistically just two options on the table – the proposed 60kph periodic speed limit or the existing 100kph.

“If something serious happens and it is still the 100kph speed limit what will people say then. It is better to accept what is being proposed now and then fight for the 60kph limit and the roundabout. But we are all here to support you in whatever you decide” Cllr Blaney said.

Fine Gael Cllr Jimmy Kavanagh said everyone’s greatest fear was that a child would be injured or something even worse could happen.

He said a new national policy in relation to periodic speed limits around schools had been introduced in February of 2015 and that had allowed Donegal County Council to make a submission to the TII in relation to Illistrin.

“Like Liam [Blaney] I would be wary of not taking what is being proposed now because it could be another five years before there is another review of the speed limit at Illistrin. Go with the 60kph periodic limit step and then that can be reviewed. I know that’s not what people want to hear tonight but I think it’s better to take this step by step” Cllr Kavanagh said.

In relation to concerns voiced by a local parent Jimmy Stafford about the policing of the proposed new periodic limit Cllr Kavanagh said he had been informed by the Council that there would be Garda enforcement to detect those exceeding 60kph at the designated times.

Fianna Fail Cllr Ciaran Brogan also advised accepting the proposal on the table and suggested that an Action Group should be informed to liaise with Cllrs and meet with local road design staff to discuss their concerns around traffic management in the Illistrin area.

Despite the unanimous show of hands in favour of the permanent 60kph speed limit meeting Chairperson Doreen Kennedy said it was clear from the Cllrs present that the only option in the short term was to accept the periodic measure that still has to be given the green light by the TII.

She added that 60kph could then be pursued with the support of local public representatives and by the Action Group engaging with road design office.

Ms Kennedy said it was essential that adequate warning signage regarding the new periodic limits be put in place on both sides of the junction.

She also strongly rejected public criticism that the parents dropping off parents at the school were careless in terms of parking and driving behaviour.

“Parents here are very safety conscious and the criticism is not fair that they are parking or driving carelessly. What we need at Illistrin is for something to be done very quickly to improve safety” Ms Kennedy concluded.