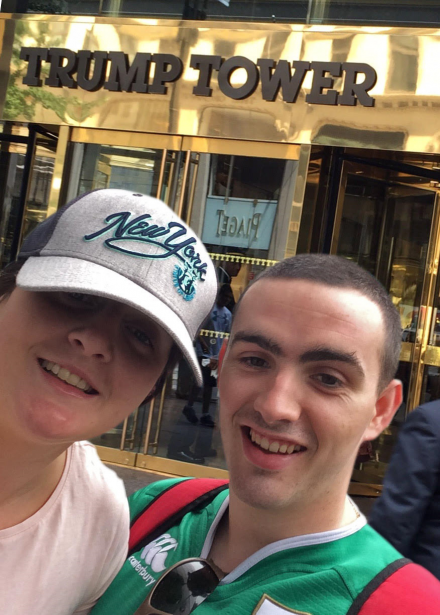 written by Stephen Maguire November 3, 2016
Facebook0Tweet0LinkedIn0Print0
One of Donegal’s most popular signage companies has become embroiled in a political scandal in the USA.
CBM Signs is one of Donegal’s most successful and popular signage businesses, and has developed a stellar reputation for being impartial when it comes to political affairs.
However, one of its employees has backed Donald Trump to become the most powerful man in the world, and it has sparked an angry backlash in the North-West.
Divisive presidential candidate Donald Trump is battling it out with Hilary Clinton to become the next president of the USA, and his election hopes have been boosted considerably after receiving the public backing of CBM Signs.
They have broke with company policy to declare their support for billionaire Donald Trump – and some of their clients are not happy!
Mark O’Donnell, a member of the Irish Defence Forces posted the following on his Facebook timeline.
“I see Charles Gallagher from CBM Signs has shown his support for Donald Trump while on holiday in New York.
“Did he receive a big pay package to back him? Or was it really just a holiday snap??
“I’ve got a feeling Donald Trump’s has hired Irelands leading sign and branding company CBM Signs to boost his campaign!!”
“Trump must have heard of Pat The Cope, Joe Mc Hugh and Charlie McConalogue’s successful election victories – thanks to CBM Signs!
Owner of CBM Signs, Bernard Gallagher was unavailable for comment last night, and Charles Gallagher was last seen in Times Square asking for directions to Madison Square Garden.
Popular Donegal signage company show support for Donald Trump! was last modified: November 3rd, 2016 by Stephen Maguire
Facebook0Tweet0LinkedIn0Print0
Tags:
CBM SignsDonald Trumpelectionnew yorknews