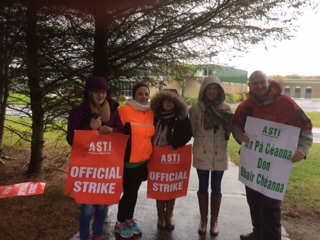 Donegal councillor calls on Govt to accept demands of teachers

A Donegal county councillor has called on the Government to accept the demands for equal pay from the ASTI teachers union and bring about an end to the present industrial dispute.

Independent Councillor Micheál Cholm Mac Giolla Easbuig has been on the picket lines this morning talking with teachers and said it was important for public representatives to show solidarity with the striking teachers.

He said, “I have been talking with teachers and fully agree with their position. I admire their determination and principled position in going out on strike for fair treatment for the future generation of teachers.

“We need to remember it wasn’t teachers who caused the financial crash but bankers, greedy developers and incompetent and corrupt politicians. Young teachers should not be made to pay the price.

“I fully support calls for equal pay for equal work to be written into law. In 2016 the idea that people are on different pay scales for the same work is just wrong.”