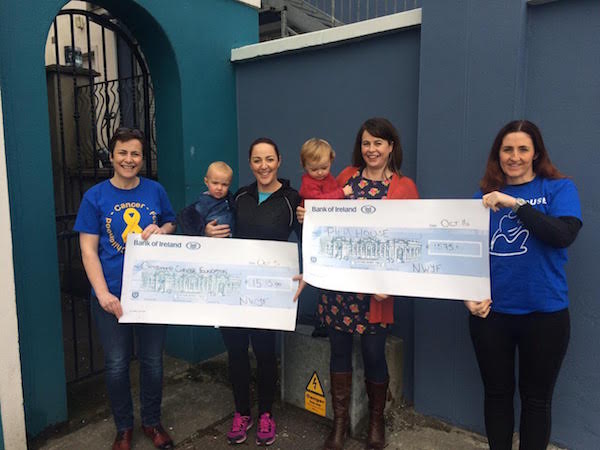 The inaugural North West Yoga Festival, which took place in late August in the stunning Doagh Famine Village on the Isle of Doagh, Inishowen has raised over €4,000 for Childhood Cancer Foundation and Action For Hope (Pieta House).

Organisers and co-founders of the festival, Aisling Friel and Odel Ward were delighted that the event was so well supported and are looking forward to it being bigger and even better next year.

Over €4,000 was raised and the proceeds, after insurance, marquee hire etc, were donated recently to the two very worthy charities, Childhood Cancer Foundation and Action for Hope to bring Pieta House to the Northwest. Each charity was delighted to receive €1,575.

Aisling and Odel met while working as yoga colleagues in Derry. Aisling is a Yoga Teacher and Beauty Therapist based in Derry Yoga and Pilates Centre and Odel runs Inishowen Yoga in Carndonagh. Both ladies are obliged to everyone who helped make the event such a huge success.

These include Pat and Majella and their team at Doagh Famine Village for providing an idyllic location, the kind yoga teachers from throughout Donegal and Derry who volunteered their time and support, the wonderful sponsors and businesses in the local community, the musicians who provided fantastic entertainment and Inishowen Carnival Group.

Odel and Aisling also thanked their friends and family who got involved with the planning and supported them before, during and after this event.

“The North West Yoga Festival is a celebration of all of the wonderful yoga we have here in Donegal & Derry and throughout the North West of Ireland. A gathering of teachers and students of all styles of yoga. It drew hundreds of practicing yogis and those interested in finding out more from all over Donegal, Sligo and Northern Ireland. The sun shone all day enabling attendees to practice indoors and also on the stunning beach. It was a fantastic, family friendly day with lots of wonderful experiences for people in yoga, mindfulness, wellness and meditation,” Odel said.

Action for Hope have stated that they will be setting up Pieta House facilities in Letterkenny and are now seeking a suitable premises in order to commence the service. It is envisaged that an outreach service will also be developed that will be more convenient for service users at all locations in the Northwest.

Pieta House provides a free, therapeutic approach to people who are in suicidal distress and those who engage in self-harm. A doctor’s referral or a psychiatric report is not required.

The Charity is also funding a medical research project in the hospital, which investigates the benefits of complementary therapies for children receiving treatment for cancer. CCF is delighted to fund the internationally recognised Beads of Courage™ which is an arts in medicine programme provided to children with cancer and helps them to understand and cope with their cancer diagnosis.

CCF will also continue to run awareness campaigns, including Light It Up Gold, while it also promotes the recognition of the gold ribbon as the symbol of childhood cancer.
The charity is also advocating for the development of peer to peer support for parents and improved services for children with cancer and their families in the New National Cancer Strategy 2016-2025 and was honoured to host the Parents and Survivors Track (Childhood Cancer International) of the 48th Congress of the International Society of Paediatric Oncology (SIOP) in at The Convention Centre in Dublin last month.