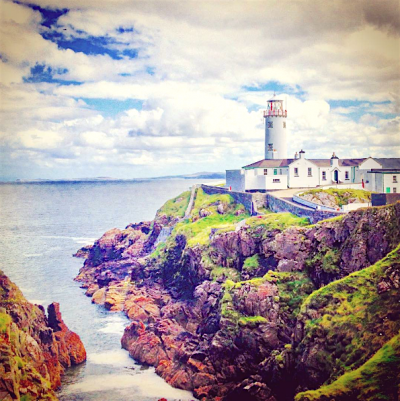 Fanad Lighthouse has received international attention once more as it is the focus of a New York Times travel feature published today.

Travel writer Jessica Colley Clarke visited Ireland in search of beautiful locations and stories surrounding Ireland’s lighthouses. In Donegal, she discovers a personal link to the area and has a unforgettable experience with her family.

The New York native describes Fanad Lighthouse as one of Ireland’s most scenic lighthouses, and recognised the uniqueness of it still operating today as it lights up the coast each evening.

With stunning imagery, the article celebrates the golden age of Irish lighthouses and modern Irish history.

Ms Colley Clarke came to Donegal with her Irish husband and father-in-law, who is a native Irish speaker. This proved helpful for the tourists as the writer recalls finding road signs in Donegal’s Gaeltacht with only Irish names.

She describes the beautiful landscape on the way to Fanad with poetic language: “Winding through mossy green farmland flecked with stones, the road seemed as if it could run on straight out to sea, but ended abruptly at the gate to the lighthouse.”

The visitors stayed in a cosy cottage and took time to explore the locality, which they found to be an excellent for viewing wildlife.

The writer visited the Lighthouse Tavern in search of dinner, where she and her family were fortunate enough to experience some warm Donegal hospitality.

Ms Colley Clarke discovered a personal connection to Fanad when she met with her father-in-law’s brother-in-law Michael Boyle, who was was the son of a local lightkeeper who was also called Michael.

As the younger Michael looked back on his childhood at Fanad Head, he talked about the frightening darkness of the sea that was only briefly illuminated by the lighthouse as it beamed across the water.

The writer had a personally enlightening moment during her visit as she walked through the darkness of Donegal – which was a memory she said she wanted to preserve forever.

In the article, titled Pursuits: Keeping the Fire of Irish Lighthouses Alive, the writer recommends staying in the lighthouse, which will serve as another great boost for the iconic structure and for Donegal Tourism on an international platform.