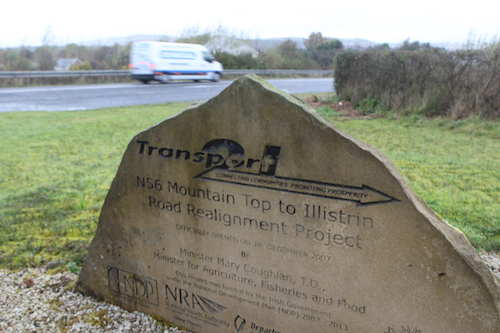 Cllr Ciaran Brogan has called for an urgent on-site meeting over the ongoing traffic concerns at Illistrin.

At Tuesday’s Municipal District meeting Cllr Brogan said nothing less would be acceptable to him.

“I am proposing that this Council ask members of our roads team and Transport Infrastructure Ireland to meet with the Illistrin Action Group to listen to their serious concerns over traffic movements at Illistrin.”

The Tirconail Tribune reports that when told by Area Roads Manager Fergal Doherty that it would be put on the Council’s shopping list for a meeting with the TII in Dublin next month, Cllr Brogan insisted that more had to be done with the first step being an immediate on-site meeting.

The Fianna Fail councillor said a meeting outside the National School on a day when classes were finishing around 3.00 p.m. would give Council staff, engineers from the local TII Road Design Office and members of the newly formed Illistrin Action Group an opportunity to collectively engage on the issues during one of the busiest traffic periods.

“The on-site meeting would help build the case for more to be done at Illistrin when we meet the TII in Dublin next month,” Cllr Brogan said.

Sinn Fein Cllr Gerry McMonagle agreed saying that there was no substitute for going and seeing the traffic problems at first hand.

“I have a couple of grandchildren at Illistrin N.S. and my family have been berating me that nothing is being done to address the worries over road safety. I would expect the Council executive to support Cllr Brogan in arranging an on-site meeting first before going to Dublin” Cllr McMonagle said.

The Council’s Fergal Doherty said he would try and facilitate the Illistrin meeting as soon as possible.

Cllr Brogan said that while the school opening and closing times were the busiest periods in terms of traffic movement there were other activities like the use of the sports pitches in the evenings and at the weekends, which also resulted in a lot of vehicles crossing in and out at Illistrin. He said one option that should be looked at is a traffic light on the Mountain Top side of the junction above the shop.

Another proposal at Tuesday’s meeting from Cllr Michael McBride was that the Municipal District supports the construction of a roundabout at Illistrin below the school in the vicinity of the Ballyare Road junction.

Cllr McBride said there huge problems with the current road layout with three exits from the school onto the busy N56 along with Ballyare junction.

He suggested that the ultimate solution would be for all traffic from the school and shop to exit left onto a new roundabout with the option then of heading in the Letterkenny direction.

However, Area Roads Manager Fergal Doherty said the area would not fit the criteria for a roundabout according to the national guidelines as it would not meet the volume of traffic movements over a 24-hour period while there would also be issues with the road gradient.

Mr Doherty said that the proposal would be included on the agenda for next month’s meeting between a Council delegation and Transport Infrastructure Ireland in Dublin.