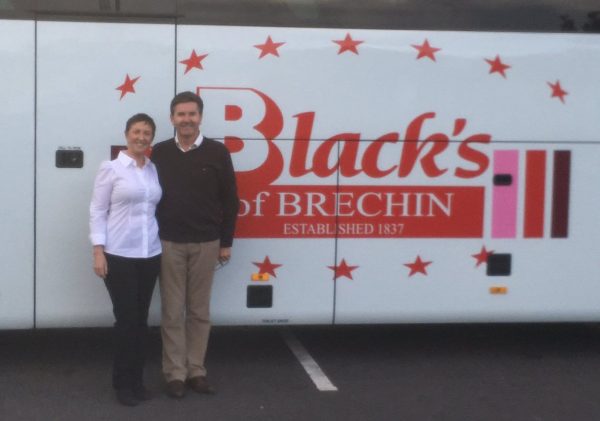 A group of Scottish tourists were starstruck when Donegal’s biggest celebrity couple made a surprise appearance during their trip to Dungloe.

A tour group with Black’s Coaches of Brechin, Scotland, stopped off at the Daniel O’Donnell Visitor Centre last month to see memorabilia and videos celebrating the iconic Donegal singer.

What they didn’t expect was to see the man in the flesh – as Daniel and Majella came out to greet the group. There was much excitement among the passengers who had a unique opportunity to meet their idols and take photos. They spent up to two hours talking with everyone in the group.

Daniel and Majella had decided to greet the eager fans after coach driver Scotty tweeted Majella with news that they would be arriving at the visitor centre.

“Going to Daniels visitor centre tomorrow with a coach tour lots of excited fans” – said the Tweet which Majella liked.

That small act turned into a once-in-a-lifetime event for the group, who were lucky enough to meet the man himself and his wife.

After the exciting day, driver Scotty posted online to thank the O’Donnells and reveal that many of his passengers were still in shock.

“He and his wife were so gracious,” one of the visitors also commented online.

Looking back on the event, tour organiser and Daniel fan Ann-Marie Black told Donegal Daily: “Daniel phoned the Visitor Centre to say he would be in but it was kept secret. We were asked to go upstairs to the room where you watch a video that tells his life story. When he came in, everybody screamed and lifted the roof off.”

“It was just delightful. It was really kind of him and his wife to come, and him meeting our passengers was exceptional.”

There was one member of the tour who was unable to make it upstairs, Ann-Marie said, but Daniel went out of his way to go down to talk to him.

“It just shows how much of a lovely couple that they are,” Ann-Marie added.

“As a result of him turning up, we have organised a tour to see him live in Edinburgh.”

Ann-Marie and her fellow fans are hoping that Daniel will remember their great encounter and say hello again the next time they cross paths.