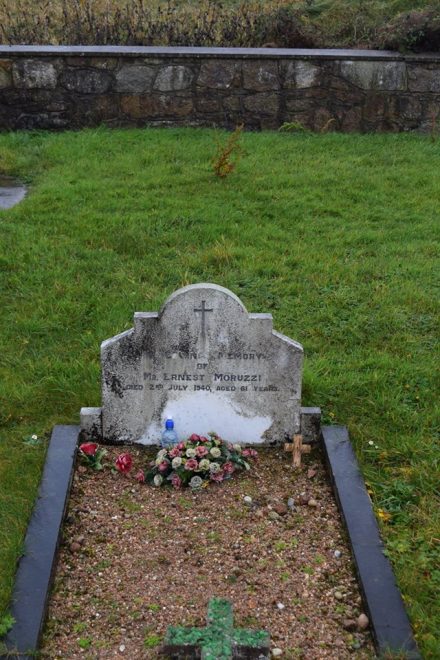 The community of Cruit Island have vowed not to forget an Italian victim who was unfortunately killed during the Second World War after being the victim of internment.

The incredible story of Ernesto Moruzzi, whose remains was washed up on Cloughglass in July, 1940 was retold on Cruit Island’s fantastic Facebook page.

The full story is outlined below:

The small poppy crosses stand in silence at Reilig Cill Bhride on Cruit Island today in memory of those seamen killed during the Second World War and whose remains found their way onto the shores around Cruit and Cloughlass in the summer of 1940.

But what commemoration for the men who never asked or volunteered to be involved in the conflict but suffered the same fate as the soldiers and seamen washed up on the west coast of Ireland in 1940? Men like Ernesto Moruzzi.

Moruzzi was a café/shop owner from Italy who had settled and made his home in Neath, Wales. Following Mussolini’s declaration of war on Britain in 1940, the British Government became terrified of the threat of Italian spies infiltrating British society and affecting the war effort. The Government decided to take direct and immediate action and commenced immediate arrest and internment of men from Italian, German or similar ethnic backgrounds who had not taken British citizenship. These arrests and internments were largely unjustified with many innocent men being rounded up purely because of their ethic origin/background. Moruzzi was one of those arrested and interned.

While some of those interned were sent to the Isle of Man to work, some of the less unfortunate – such as Moruzzi – were put on board the doomed Arandora Star which was to sail from Liverpool docks to internment camps in Canada. The Arandora Star was built as an ocean liner and was converted into a cruise ship in 1929. But her final journey was certainly no cruise. Designed to carry around 500 passengers and crew, in late June 1940 the boat set sail from Liverpool for Canada’s east-coast with near 1500 people – including 734 interned Italian men, 479 interned German men, 86 German prisoners of war – on-board.

The Arandora Star looked like a troopship and had no Red Cross markings. It has been suggested that it is because of this absence of markings that at around 6.15am on 2 July 1940, around 100 miles northwest of Bloody Foreland, a torpedo was fired from the infamous Gunther Prien’s U-47. Apparently unaware that he was attacking his fellow countrymen and their Italian allies on board, the torpedo from Prien’s U-47 hit the Arandora Star and within half an hour the ship was making its way to the Atlantic sea-bed. 470 Italians and 243 Germans drowned, as did 37 guards.

Ernesto Moruzzi’s body was found on 30 July 1940 at Cloughglass. He was accompanied only by a few personal belongings including a receipt for his yearly subscription to the Neath Constitutional Club, five religious medals and a small crucifix.

Today Moruzzi’s grave lies at the back of the graveyard on Cruit Island. He has lain there for 75 years. Unlike the British seamen buried at the entrance to the graveyard, there are no fresh poppies or crosses on Ernesto’s grave today to commemorate his life. Let us not forget such men.