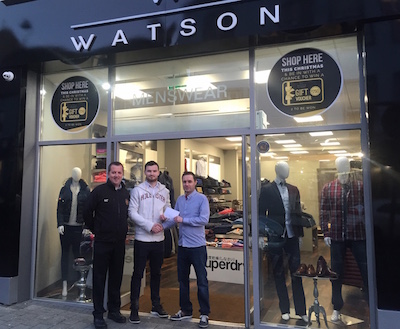 COCKHILL CELTIC defender Peter Doherty has been named as the Watson Menswear Ulster Senior Legaue Player of the Month for October 2016.

Doherty has helped lead Cockhill’s defence of their 4 Lanterns Ulster Senior League title while October also saw him captain the USL’s representative side to the FAI Intermediate Interprovincial Tournament in Cork.

Cockhill are at the summit again and have a game in hand as well as a two-point advantage to Fanad United.

“It was a good month,” Doherty reflected.

“We started to get going and we started to play ball again.”
Doherty believes that the recent revival at Fanad can only be good for the League.

He said: “Fanad are strong again this season and that’s adding to the League.
“It’s good to have a team pushing you on. We have a lot of very good teams competing in the League. It keeps you on your toes.”

Cockhill haven’t lost an Ulster Senior League game in the last four seasons when they’ve won the title, but they have retained an insatiable appetite for success.

Doherty said: “There has been a lot of success, but we have drive to do more. We don’t want to lose our unbeaten run in the League and just want to keep the good form going.”

Doherty captained the USL side to the Intermediate Interprovincial Tournament in Cork, but a 2-0 loss to hosts Munster – after a 3-2 win over Leinster and a 2-0 win over Connacht – saw them leave empty handed.

Doherty, who started in all three games, said: “We were disappointed not to win it on the last day. The one thing we couldn’t do was lose by two goals and that’s what we did.

“We had two good wins before the last day and gave a good account of ourselves.”
Cockhill are in FAI Intermediate Cup action this Sunday. Gavin Cullen’s side travel to Cork to face College Corinthians.

Doherty, whose team beat last season’s finalists Letterkenny Rovers before recording a one-sided win over Swilly in round two, said: “Big time, we have to do something in the Intermediate. That’s the big aim now, to string a few games together. Letterkenny got momentum last year and saw it to the final.

“We have nothing to fear. We’re talking about them, but I think they’ll be looking at our run too. We’re full of confidence. The bookies have them as favourites, but with the players we have and the squad we have, we’re confident.”