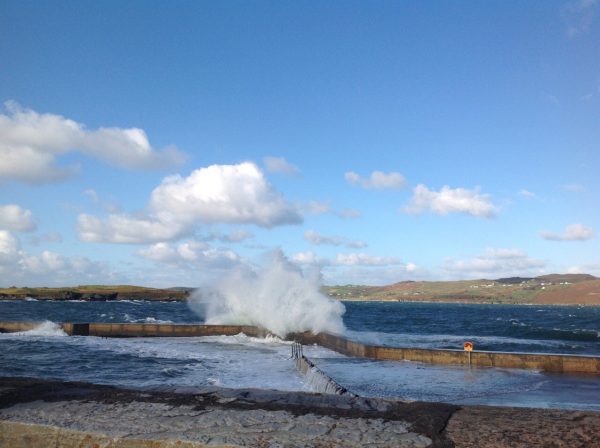 Sheephaven sub-aqua diver not put off by stormy sea conditions

When the weather stops diving Sheephaven divers can do either of two things, go abroad for warmer waters or go snorkelling and last week there are reports of both.

First up over the last few Sundays there has been a dedicated turnout of Sheephaven snorkelers at PortnaBlagh, in some cases braving very poor sea conditions indeed.

Last Sunday was also quite poor, both in and out of the water, with air temperatures near zero and a real nip to the water temperatures.

However for the snorkelers involved it was great to be in the water and getting the very best of what Donegal waters have to offer as winter begins to beckon.

One Sheephaven diver has just returned from much warmer temperatures is club Chairman John Joe Rowland, when he travelled to New Zealand to meet his engineer son John and took the opportunity to get a few dives in while there.

John Joe carried out dives in both New Zealand’s north and south islands, starting with an exceptional wreck dive on the 170 metre, 20,000 tonne MS Mikhail Lermontov, a Russian cruise liner sunk in 1986.

How she struck rocks of Port Gore, Marlbourough Sounds, New Zealand has a familiar enough story, when the local pilot leaving Picton with a mainly Australian complement of passengers took a short cut and ended up with a fatal gash 5.5 metres below the waterline on its port side.

Happily all 743 on board got off safely and by all accounts just in time, as she sank below the waves 20 minutes after the last person on board was rescued.

Today she lies on her starboard side in depths between 14 and 38 metres and while popular with divers involves a 2.5 hour car journey to the dive site.

John Joes’ visit was guided on site in conjunction with Nelson SAC and Brent Mc Fadden of Go Diving Dive Centre, where they conducted four dives in good water conditions of temperatures of over 14 degrees Celsius and visibility of greater than 10 metres horizontally.

As ever the Donegal connection is never far away, with Brent Mc Fadden’s ancestors immigrating to New Zealand in 1862. Brent is looking forward to tracing his Irish roots in the near future.

John Joe’s second New Zealand diving experience was at the Poor Knights reef in North New Zealand, which has a mixture of sub-tropical reefs and caves.

It was reported to have been considered as the 7th best dive location by none other than diving legend Jacques Cousteau.

The islands involved that make up this location originated from an eroded 4 million year old volcano. They have been uninhabited since the 1820 and today are a sub-tropical marine nature reserve, with a no-take zone that encourages species like the great Rays to flourish.

Due to its sub-tropical climate water temperature was a very comfortable 14 degrees Celsius, while in-water visibility was reported as excellent.

While it will be some time until Donegal water temperature returns to similar levels, in the meantime we will enjoy what we have – any chance we get.