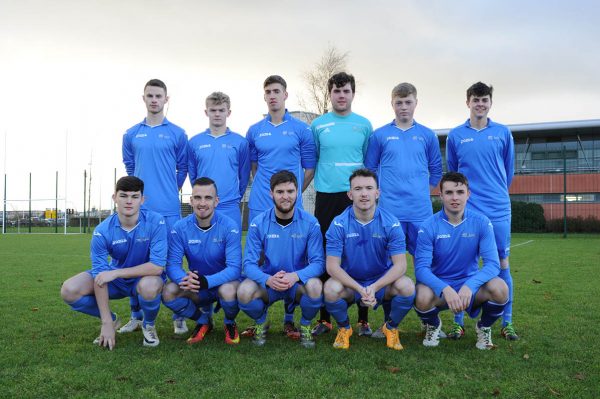 The LYIT Men’s soccer team have finished the 5th round of games in the Colleges and Universities Football League on 12 points and will top the table in the Division 1 league. This position guarantees the team a home draw in the quarter finals of the league play offs which are schedules for next month.

The victory over Maynooth University in Letterkenny last Tuesday when LYIT won 1-0 with a goal from Adrian Delap in the 29th minute. The home team worked hard throughout the game but, it has to be said they did not take advantage of many scoring opportunities to seal the victory long before referee Marty Quinn’s final whistle.

Maynooth were well worth a point in this game, especially with their first half performance. However the victory was sealed with good defending on the part of both Ciaran Kelly and Lee McColgan, both of whom are first year students in LYIT.

Brian McVeigh was forced off early in the second half of the game with a fractured nose due to a clash with a Maynooth midfielder Sam Watkins. It is hoped that his recovery will be swift as the Lettereknny Rovers player has been in impressive form for his college since the outset of this year’s CUFL programme.