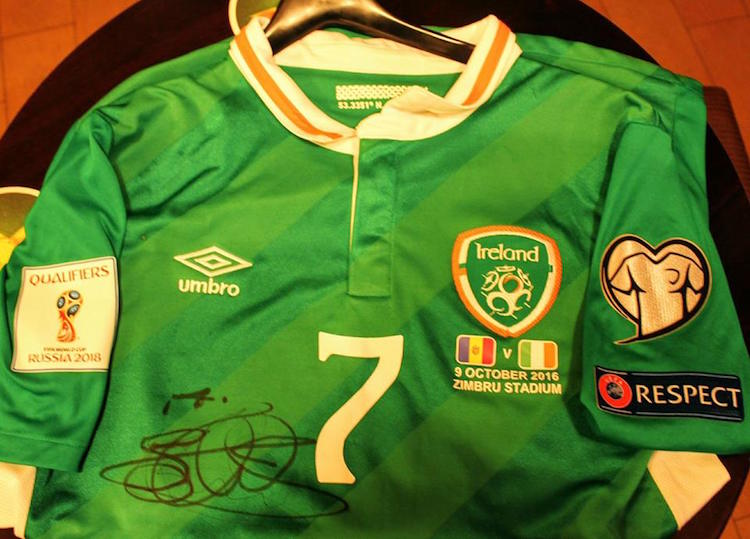 This famous Irish jersey is up for auction in Donegal tomorrow

SHANE DUFFY has donated his famous Republic of Ireland number 7 to the Paul Holian Recovery Fund – and it will be auctioned tomorrow night.

At the Shave the Date headshave event in the Dry Arch Inn, the shirt worn by Duffy last month will be auctioned off.

Duffy is a Derry native, but his father Brian hails from Letterkenny while his mother Siobhan is originally from Raphoe and the family has retained strong connections with Donegal.

The Brighton defender was selected by Martin O’Neill, the Irish manager, for the World Cup qualifiers against Georgia and Moldova in October.

Duffy stood out, not just for his displays – but the fact that he was a centre-back wearing the number 7 shirt!

“The kitman stitched me up by giving me that number,” he explained at the time. “Hopefully, I won’t have it too much longer.”

Duffy wore number 15 for last month’s win over Austia in Vienna with Aiden McGeady’s arms back through the number 7’s sleeves.

The jersey worn by Duffy for the 3-1 win over Moldova in Chisinau is up for grabs tomorrow night.

The Dry Arch is hosting the shave night, where a number of local ‘celebrities’ are going under the razor to raise money for the Paul Holian Recovery Fund.

The night gets underway at 9pm.

Friends have set up The Paul Holian Recovery Fund to help Paul and his partner Nicola (and two children, through his long and difficult road to recovery.

Paul, from Barrack in Ballyare, suffered a devastating accident on July 9th that has removed him from work and leisure activities for the foreseeable future.

This famous Irish jersey is up for auction in Donegal tomorrow was last modified: December 1st, 2016 by Chris McNulty