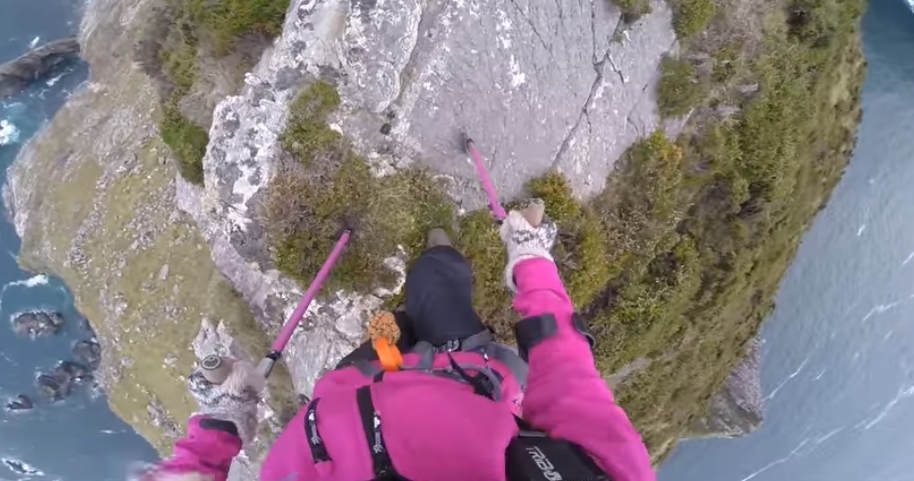 During the week, long term crutch user Nikki Bradley and mountain expert Iain Miller stood on the summit of one of Ireland’s most outrageous headlands.

‘The Sturrall’ is one of the most outstanding sea cliff features in Ireland, it is a true monster of a headland sitting isolated and far from the real world. It sits equidistant between Glencolmcille Village to the South and the An Port road end to the North of county Donegal.

Nikki was diagnosed with a rare form of bone cancer at sixteen and by twenty six, had two hip replacements. Nikki is one of less than ten people worldwide to live through what she has.

Nikki hasn’t let this stop her, and after receiving the news that she would be on crutches permanently in 2013, she decided to establish ‘Fighting Fit for Ewing’s’.

‘Fighting fit for Ewing’s’ centres around setting fitness challenges. Nikki says that “the purpose of participating in challenges is to highlight the importance of exercise for rehabilation and I am living proof that it actually works! Prior to exercising regularly I relied heavily on painkillers. I suffered from chronic pain and thought that medication was my only option. I hated it. I am a healthy person and always felt that I was damaging my organs with such strong medication. Within a couple of months of vigorous exercise I was off ALL painkillers for the first time in ten years.”

The ridge Nikki and Iain scaled this week is approx 800m long and 180m at its highest point. The pair set off shortly after 11am and didn’t return to their vehicle until darkness was approaching.

The challenge included a 10km trek, abseiling and rock climbing along with negotiating dangerously narrow pathways.

Nikki who founded a fitness based awareness campaign called ‘Fighting Fit For Ewing’s’, regularly participates in physical challenges to highlight the importance of exercise for rehabilitation.

When describing the climb she said it was ‘an absolutely brilliant day’ but marked it as her ‘toughest challenge in Ireland to date’.

Nikki walks with crutches due to permanent damage caused by radiotherapy and experiences pain daily.

Since teaming up with Iain Miller however, Nikki has managed to successfully climb numerous mountains along with abseiling and rock climbing despite continued set backs.