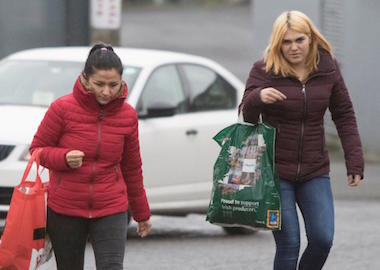 A number of men have been interviewed by Gardai following a raid on a brothel.

The men were observed over a week long period by undercover detectives at an apartment in Letterkenny.

Two women and a man appeared in court today charged with knowingly allowing a premises to be used as a brothel.

All three were Romanian nationals who were arrested by detectives at Court Manor House at Justice Walsh Road following a surveillance operation.

They then approached a number of men leaving the premises at different times and took statements from them and they confirmed the apartment was being used for prostitution.

Garda sources have revealed that the men who visited the premises had come from as far away as Northern Ireland and Sligo to use the services of the women.

When Gardai raided the premises on Saturday night last, December 10th, Detective Cullen said it was obvious that there was sexual activity going on in a bedroom while another man and woman remained in a sitting room.

He added that it was evident from a search of the premises that it was
being used for habitual prostitution.

The man found on the premises is understood to be a 75 year old man
from rural Donegal.

Gardai said they were satisfied that the women were not being
trafficked and were operating independently.

Patsy Gallagher, defending solicitor for all three people, said they
were from a very poor part of Romania where the average weekly wage
was just €50.

The three before the courts were Daniella Costache, 19, of no fixed
abode, Daniella Ionita, 28, of Court House Manor, Letterkenny and
Florin Nic, aged 35, of Sanefield Court, Ennis, Co Clare.

All three were charged with knowingly allowing a premises to be used
as a brothel.

The court was told that there is a bench warrant out for the arrest of
Ms Ionita from Tralee District Court recently for a similar offence.

Judge Paul Kelly released Ms Ionita on her own cash bail of €500 cash
to appear at Tralee District Court on December 14th next. He also
applied the Probation Act and forfeited the remainder of the cash.

He also applied the Probation Act to the other two accused and also
offered them to forfeit the seized cash to the State.

The raid is the second on a brothel in the Letterkenny area in two weeks.

Three other Romanian women were also arrested when Gardai raided a
premises at Lower Main Street in Letterkenny.

All three were also advertising their services on the Escort Ireland website.