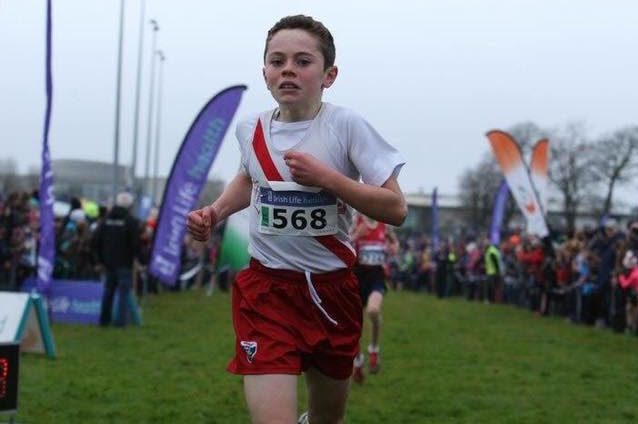 All roads led to Dundalk at the weekend for the National Uneven Age Cross Country Championships, the athletes having to qualify out of Ulster to compete in this event.

Cranford Under11 were up first and for these 3 young athletes it was their first ever National Cross Country competition.

The Under-11 girls were up first with Miah Fletcher having a great race coming home in 14th place and earning herself a Ulster Team Gold Medal and with Miah having another year in this age is definitely one to watch.  Clodagh Neely had a very good run finishing well up the field in 40th place.

Next up was Caolan McFadden in the boys Under-11. Caolan was up with the leading pack from the gun and ran a very impressive race.

There were 4 in the top group who got away and with 200m to go it was anyone’s race. Caolan dug deep and finished a very impressive 4th place and also won two Gold team medals after leading his county and province home.

Next up was our boys Under-13 with Oisin Kelly, Max Roarty, Liam Donnelly, Conor Neely, Oran and Cian McMenamin. We had high hopes for this team but it just didn’t come together today for these young lads but no doubt they will be back stronger next year.

Oisin Kelly was the stand out performance of the day for Cranford. Oisin got off to a great start where there was a group of about 15 together for about 500m and with 1000m gone 3 runners made a break with Oisin in 5th place keeping in touch with the leading pack.

It was another Oisin (Calhoun) from Derry who was leading at this stage and many a battle these two boys had in Ulster but with 300m to go Oisin Kelly came up along side the leaders and heading for home there was no stopping him and he went for the finish and came home in first place earning him the National Champion title.

He also won a bronze medal for 3rd provincial team.

Next up was Johnny McGroddy and Eoin Logue in the u15 boys race with both boys running very well. Johnny gave it his all and was never far away from the leading pack and after a great run came home in 10th place, also winning a Gold provincial medal.

Our U/19 boys were up next and Eoin Kelly and Kevin Logue both ran very well over this 6k course. Eoin Kelly came home well up the field earning himself a bronze County and bronze provincial medal with Kevin following close behind winning a bronze County medal.

Lucy Backus was up next in the Novice ladies and she had a good strong run finishing well up the field.

Congratulations and well done to all the athletes who took part on what was a great day for Cranford AC winning a total of 11 National Medals. None of this would be possible without the hard work and dedication from the coaches Eamon Giles, Ernie McElhinney, Joe Boyce, Rose Gavaghan and Bridie Trearty.

Thanks to everyone who turned out for the cavalcade and to the people of Kilmacrennan and Creeslough who welcomed our athletes home and to the Beach Hotel in Downings for hosting a welcome home party with Myles Gallagher acting as MC for the impromptu event.

The Christmas Hamper draw takes place this Friday in the Beach Hotel and then on Boxing Day Cranford will once again will host the Bill Hunter and Winifred Gallagher Memorial Race at Cranford Park and we look forward to seeing you all there.