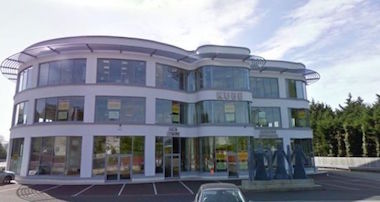 A Letterkenny man has been told by a High Court judge that he will go to prison if he does not comply with orders surrounding a building known as The Kube.

Noel Devine was part of the group which staged a sit-in at the building on the outskirts of Letterkenny.

Local businessman Brendan Gildea, who was also a member of the protest group, owned the property before it was taken over by a receiver, appointed by Danske Bank to recover millions he owed the company.

The Irish Times reports that receiver Martin Ferris obtained a High Court injunction against Mr Devine and Mr Gildea, who were among the group of some 20 people who entered the building on November 18th and told council staff to leave.

The receiver alleged Mr Gildea had said he would only return the premises to the council if it signed a new lease with him.

As a result of Mr Devine’s actions, including an alleged threat to get a skip and dump chemicals in the council offices, the receiver sought to have him brought to court by gardaí to explain why he should not be jailed for contempt of court orders. The receiver claimed Mr Devine appeared to be in Northern Ireland.

Devine purged his contempt of a High Court order over the takeover of a county council offices at the building last month.

At the High Court yesterday, Mr Justice Tony O’Connor was told Mr Devine had turned up in court voluntarily. Mr Devine said he did not wilfully disobey any court order and was “genuinely unaware” of it.

He said he had difficulties reading and writing, but once someone said to him his name was on a court order attached to the Kube building, he left and did not return. He said he had got involved in the protest because he was a friend of Mr Gildea’s and “would always help a friend in difficulties”.

He had a number of personal problems at the moment due to the Police Service of Northern Ireland, he added. Mr Devine said he had no fixed address at the moment as he was divorced and currently staying at a hotel.

He said he had not received any court papers previously but was prepared to pick up from Letterkenny Post Office a statement of claim which the receiver would bring against him over this alleged interference. An email address for his partner was also provided as he did not use computers.

Mr Justice O’Connor said he was satisfied with Mr Devine’s apology and undertaking to comply with the court’s orders and would release him from the application for his committal to prison.

Any further breaches would result in serious consequences, he warned.

Man warned he will be jailed if he does not comply with ‘Kube’ orders was last modified: December 18th, 2016 by Stephen Maguire
Facebook0Tweet0LinkedIn0Print0
Tags:
BRENDAN GILDEAHIGH COURTKubeNOEL DEVINE