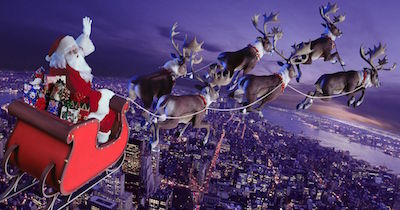 BREAKING NEWS: Santa has arrived in Donegal a little earlier than usual after hearing reports that Donegal is the coolest place to visit in 2017.

According to sources at the North Pole, Santa wanted to see what all the fuss was about and why National Geographic raved about our county.

So far there have been sightings of his sleigh in the skyline above Fanad (he wanted to see the lighthouse) as well as Sliabh Liag, Glenveagh and Malin Head after he heard his old pal Luke Skywalker told him about it.

Local Dunfanaghy tour guide Chris Massey has said there have been reports that Santa has visited the area in recent weeks disguised as an American tourist.

“We heard he was in the area because he had heard Donegal is the coolest place to visit in 2017.

“He knew he wouldn’t have time at Christmas because he had to visit boys and girls around the world on Christmas eve.

“He stayed in the Shandon Hotel because he heard about the spa and he was spotted in Kelly’s Centra at Mountaintop because he was short on a few supplies.

“We also heard he slipped into Voodoo in Letterkenny but only had a couple of Football Specials because he never hasn’t anything strong a few weeks before Christmas because of the long journey.

“The last thing he wants is to be stopped by Garda Eunan Walsh at a checkpoint on the outskirts of Letterkenny on Christmas eve,” said Chris.

Chris added that the mystery American visiter did say that he knew of a young boy and girl in New York who didn’t go to bed early on Christmas eve and didn’t wake until 3pm on Christmas Day.

“Imagine missing half of the best day of the year,” the man with the white beard and strange black boots told Chris during his visit.

Santa arrives early after National Geographic’s claim that Donegal is coolest place for 2017 was last modified: December 24th, 2016 by Stephen