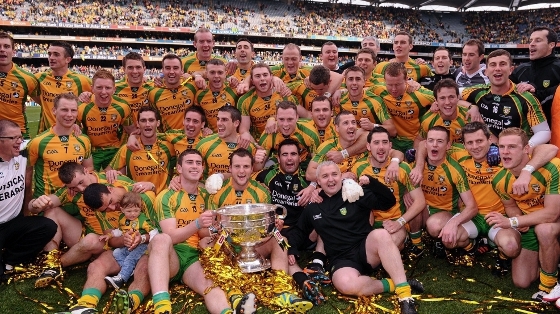 A picture that shows just how much Donegal have changed since winning Sam!

IT’S HARD to believe that’s it’s just over four years since Donegal went daft in the dizzying buzz of the All-Ireland win in 2012 – but how the landscape has changed since.

The above picture shows Donegal celebrating with Sam Maguire on the pitch at Croke Park after their win over Mayo in the final.

A total of 40 men, players and backroom team members, are pictured.

Of that number, only eleven of them will be involved with the Donegal senior football panel in 2017.

Donegal will also be without Leo McLoone, Odhrán Mac Niallas and Anthony Thompson this year, while Colm McFadden and Eamon McGee had already retired in the wake of last year’s All-Ireland quarter-final loss to Dublin.

Paul Durcan and Ryan Bradley have not played for the county since 2015 and 2013 respectively and both live in the Middle East.

The other two pictured who are part of the panel for 2017 are Michael Boyle and Martin O’Reilly.

A picture that shows just how much Donegal have changed since winning Sam! was last modified: January 11th, 2017 by Chris McNulty
FacebookTweetLinkedInPrint