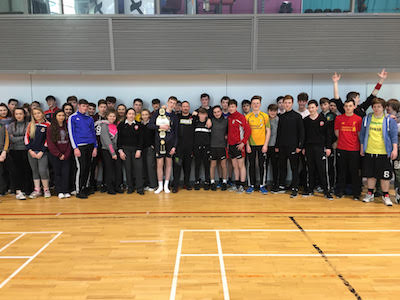 The man who guided Conor McGregor to world superstardom has told a group of shocked Donegal pupils that they can be anything they want to be.

John Kavanagh left the secondary pupils at Rosses Community School in Dungloe speechless today when he walked into their school.

A chance encounter with school principal John Gorman on a Dublin street several months ago ended in McGregor’s manager promising to visit the school.

And principal Gorman was left delighted when Kavanagh contacted the school boss telling him that he was keen to make the long journey to West Donegal.

Principal Gorman said “I wasn’t sure if he was serious or not because he is such a busy guy and I know people say a lot of things even though their intentions are always good.

“But when he contacted me to say he would make his way to Donegal to speak to the students, I was blown away.”

The Dubliner told the 465 pupils and teachers pupils how they had to be resilient and the need to stick with what they love.

He also told pupils that any success only came with hard work and effort and that we learn more from our losses than our successes.

Principal Gorman said his words and advice to pupil were incredible.

“I will put it this way – if I wanted to script what somebody would say to encourage pupils in life, then what he said is what I would have liked to have written.

“He was just an amazing guy. He must have stood for a thousand selfies with everyone and gave so willingly of his time.

“He also told the students how he wasn’t one of the popular kid growing up and that he was into comics and not sport and it’s important for the students to hear that they can do their own thing.”

Kavanagh also gave tourism in Dungloe an injection of life when he tweeted from the Waterfront Hotel saying how much he had enjoyed his time in West Donegal.