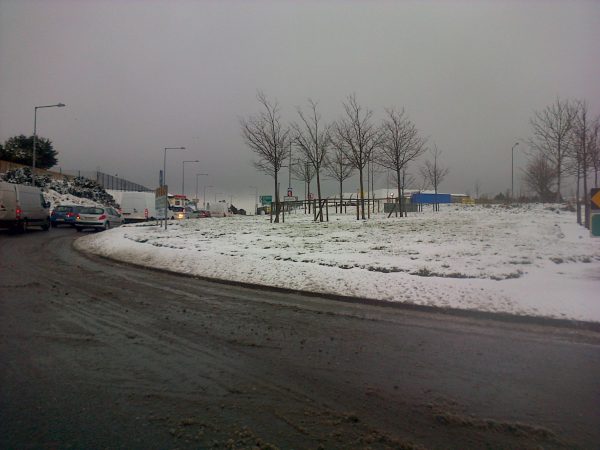 Independent Cllr Michael McBride is to ask Donegal County Council engineers to look at the current layout and the traffic flow at the roundabout on the N56 at the Mountain Top outside Letterkenny.

He says serious concerns have been raised with him in relation to the way two inbound lanes merge into one immediately after exiting the roundabout on the town side.

Cllr McBride said he has been alarmed at some of the very dangerous manoeuvres being tried by motorists and it has led to many incidents of road rage on a regular basis.

“People have been coming to me worried about the situation and the potential for more serious incidents of road rage at the Mountain Top Roundabout.

“Basically what is happening here is that there are the two lanes of traffic coming up to roundabout from the Kilmacrennan side. There are serious tailbacks there in the morning and some motorists are using the outside lane to get further up the queue and then trying to squeeze into the single lane of traffic on the Letterkenny side of the roundabout.

“That is leading to a lot of very dangerous manoevures and incidents of road rage. Cars trying to merge into the single lane is bad enough but sometimes it can be buses which can be even more frustrating for the vehicles who have stuck to the correct land” Cllr McBride said.

The Independent Cllr acknowledges that there is no simple solution to the concerns that have been raised with him by some motorists.

“One solution would be to merge the two lanes some distance before the Mountain Top Roundabout but that would leave longer tailbacks back down the Kilmacrennan Road. But the situation as it stands is not safe and people don’t want to see even more serious incidents of road rage than have happened so far.

“So I will be asking the engineers to have look at it and bring back a report with hopefully recommendations that calm the situation down for all concerned” said Cllr McBride who will raise the matter at the next month’s Muncipial Council meeting in Milford.