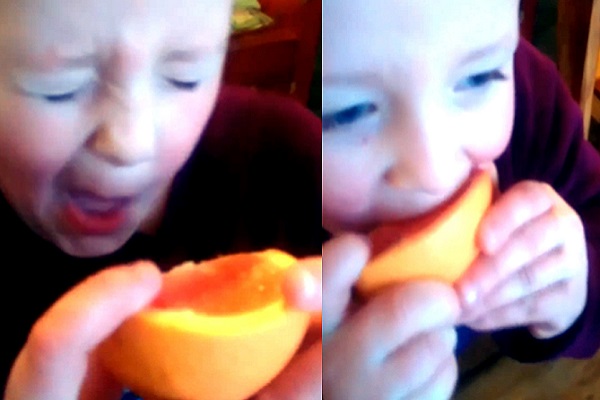 DDTV: Pranked Donegal boy left with a sour taste in his mouth

Donegal boy Jay Ramsay had a shock to his taste buds when he fell victim to a prank from his father yesterday.

Jay, who lives outside Manorcunningham, took on a bet from his dad Gary Ramsay that he would give him five euro if he ate all his orange.

The seven-year-old tried his best to eat the orange – which was actually a grapefruit! His little face shows how much he disliked the sour taste. Jay didn’t have to eat all the fruit but was rewarded the cash for his efforts.

Jay’s dad Gary, who owns The Float Room in Stranorlar, told Donegal Daily: “We were making dinner yesterday and he kept asking for an orange but I told him after his dinner, but he kept asking so that’s why I gave him the grapefruit and the bet.”

Gary explains that wee Jay hasn’t been put off oranges for life after that shocking experience to the taste buds:

“He thinks the video is hilarious and it’s going to make him famous. He knows now it wasn’t an orange,” Gary said.

Jay will have to ‘concentrate’ on his fruit choices if they ever come from his dad again! Check out the video below:

Do you have a funny video to share? Send it to info@donegaldaily.com